Foreign autos are doing better than ever on the Korean market, armed with competitive lineups and eye-popping discount promotions. Local manufacturers can’t seem to find a solution to stop their market share from shrinking.

According to data released by the Korea Automobile Importers and Distributors Association (Kaida), the market share for foreign automakers in the country in the first half of this year hit an all-time high of 16.6 percent with sales of 119,832 units, a 27.1 percent rise from a year earlier.

Ford came in fifth, selling 5,625 cars thanks to its midsize diesel sedan Mondeo and Explorer SUV. Most of the foreign brands including Land Rover and Volvo reported double-digit increases in sales from a year ago. 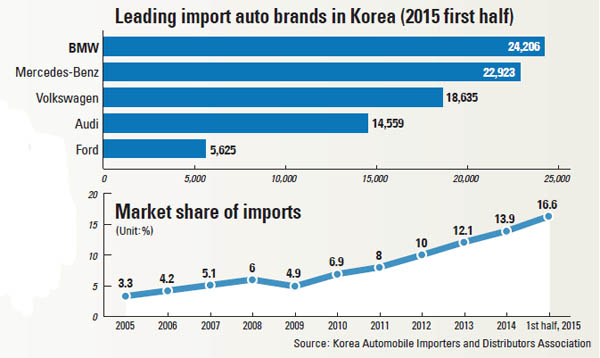 Among the foreign brands, Mercedes-Benz pulled in the most money.

BMW sold more cars, though Benz made 2.14 trillion won ($1.8 billion) in revenue, about 500 billion won more than BMW, thanks to its premium S-Class sedan, which goes for between 128 million won and 294 million won. Kaida said about half of Benz’s revenue came from the S-Class, of which the company sold 6,379 units through June.

One of the biggest reasons sales of imported cars hit an all-time high was that foreign brands carried out a series of discount promotions to clear their stocks of Euro 5 models, as the all-diesel cars will be subject to Euro 6 emission standards in Korea starting in September.

BMW offered discounts of up to 10 million won for its popular 3 and 5 Series models. The company sold a total of 3,596 units of the mid-size sedan 520d through June, the second most among all imports, and 2,447 units of the 320d, the sixth-most among foreign models, during the same period.

BMW is even creeping up on the nation’s fifth-largest automaker, Renault Samsung Motor (RSM), in terms of sales as it sold 5,744 units in June, only 1,179 units short of RSM. The gap between the two companies was about 5,000 units last year, but sales by RSM only increased by 0.8 percent through June from a year ago, while sales by BMW increased by about 20 percent. The company doesn’t want to lose the chance of widening its share even more. It will roll out a new premium large size sedan, the 7 Series, and a compact SUV X1, as well as upgraded editions of the 3 and 6 Series.

“Previously, most of the popular imports were expensive cars that only people in high-income brackets were able to afford,” said Yoon Dae-sung, a Kaida executive. “But foreign brands have been competitively introducing cars that offer high performance and fuel efficiency at reasonable prices. Looking at the sales figures, it looks like more than 200,000 imports are expected to be sold this year.”

Industry insiders worry about local automakers because it looks like they don’t have a clue how to fight back. The nation’s two auto giants, Hyundai Motor and Kia Motors, announced in January that they aim to sell 8.2 million cars combined, but they failed to sell half that amount in the first six months. Together they sold 3.94 million units through June.

Hyundai Motor recently expanded the lineup for its best-selling sedan Sonata by adding a turbo and diesel engine models, but the company recently decided to reduce production of the Sonata at the Asan plant in South Chungcheong.

The new large size Aslan sedan, which the company said targets corporate executives, was a complete failure and only 5,230 units were sold this year.

The company recently announced that it will strengthen its marketing with some discounts, but it’s questionable whether that’s an ultimate solution. “Offering a discount can’t be a solution for sure because it would damage the operating profit,” said car columnist Seo Myung-soo. “Leading automakers like Hyundai and Kia need to focus on improving premium cars so that they can compete with imports.”