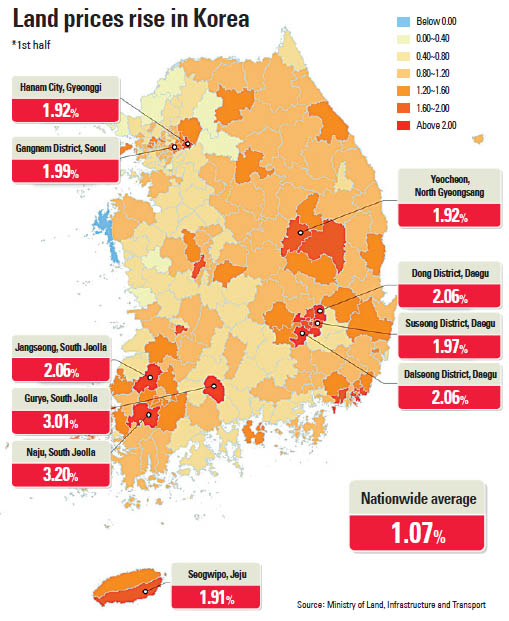 Jeonse rental prices in the Seoul metropolitan area have topped 10 million won per 3.3 square meters ($8,555.50 per 35.5 square feet), Kookmin Bank data showed on Monday. Experts said the increase in jeonse prices was due to a lack of housing available for jeonse contracts, a lease system unique in Korea that requires a lump sum cash payment that is returned two years later.

An average jeonse price per 3.3 square meters in areas including Seoul, Incheon and Gyeonggi has risen to 10.2 million won in June, up 6.6 percent from about 9.5 million won in January. An 85-square-meter apartment would cost about 262 million won.

Areas outside of Seoul also saw steep jeonse price gains, with five major cities across the country seeing an average 4.4 percent increase during the first six months of this year.

Jeonse prices nationwide have been on an upward curve for the past 76 months, since Feb. 2009, right after the subprime mortgage crisis.

Seoul’s average jeonse price per 3.3 square meters, at 13.9 million won, was the highest among those of major cities. Gyeonggi followed at 8.6 million won.

Experts said the current low interest rate environment has encouraged landlords to list their spare homes at monthly rent (wolse) instead of jeonse, causing a drought of homes available for the traditional contracts and sparking the price gains.

Separately, Ministry of Land, Infrastructure and Transport data on Monday showed that property prices across the country have risen modestly, up 1.07 percent during the first half of this year. Property values have risen for 56 consecutive months.

Seoul’s property prices rose 1.26 percent during the first six months of this year, while Gyeonggi and Incheon saw comparatively modest price gains of 0.8 percent and 0.9 percent.

The small city of Naju in South Jeolla has seen a massive government agency relocation project, and land prices there were up 3.2 percent.

Property prices in Gurye rose 3 percent and those in Jangseong, 2.1 percent. Both are in South Jeolla.