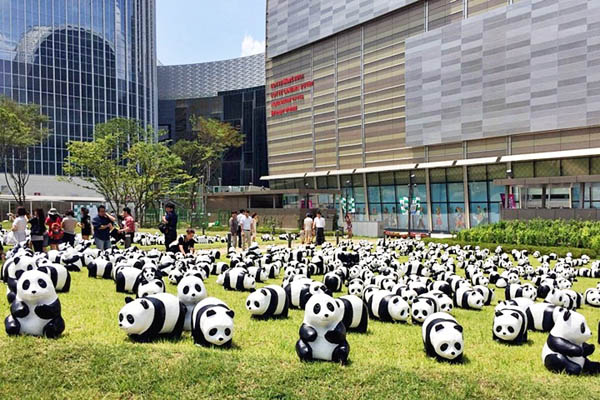 The shopping mall said the event is intended to give visitors a tour around the country to convince them that the country is safe to visit.

The tour will run from July 26 to Aug. 1, with an itinerary including Dongdaemun Design Plaza and a promotion hall built by the entertainment label SM Entertainment. The group will also visit the office of the Korea Centers for Disease Control and Prevention, the head office of the Busan International Film Festival and Haeundae Beach in Busan, as well as Lotte World Mall.

The mall expects its public art project on display at the high-rise shopping complex to become a tourist attraction.

The 1600 Pandas+ exhibition features 1,600 papier?mache pandas; its purpose is to raise awareness of endangered animals and promote sustainable growth.

The touring exhibition was developed by French artist Paulo Grangeon in collaboration with the World Wide Fund for Nature.

After its first launch in 2008 in Paris, the project was shown in countries such as Italy, the Netherlands, Taiwan and Hong Kong.

AmorePacific, Korea’s top cosmetic brand, has seen huge sales increases in China and other Asian countries. It is also weighing in on bringing back Chinese tourists by inviting 200 people from China, Hong Kong and Thailand. Its guests are journalists, customers and retail industry figures. In four groups, they will begin their tours in mid-August.

The cosmetics maker also announced on Monday that it had distributed gift certificates to its workers, which can be used at traditional open-air markets, hoping that the workers’ visits to the markets will boost sales hurt by MERS.

AmorePacific said that with government agencies, it plans to support a K-pop concert to attract Chinese tourists.

The moves are the latest in a string of efforts by retailers and hospitality operators to boost tourism in Korea.

Earlier this month, a coalition of the Korea Tourism Organization, Asiana Airlines and Lotte Duty Free invited heads of major Chinese tour companies, journalists and power bloggers to Korea, in an effort to ease worries about the fatal virus and revive interest in Korean tourism.

Two hundred people, including 150 CEOs of major tour companies across China, 40 journalists and 10 power bloggers, visited Seoul from July 15 to 18 for the tour.