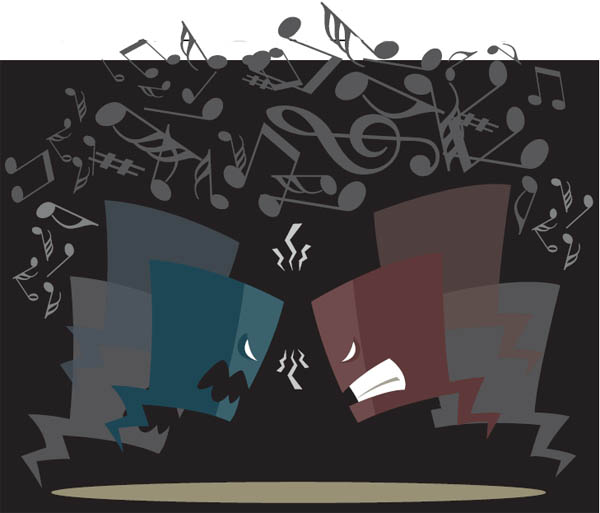 About 50 singers and composers who are members of the Korea Music Copyright Association (Komca) held a press conference at the 63 Building in western Seoul to complain about the Ministry of Culture, Sports and Tourism, which they said “secretly” approved the Korean Society of Composers, Authors and Publishers’ (Koscap) new system of distributing copyright royalties.

That was of course, unwelcome to Komca, which had had a management monopoly on local musicians’ copyrights for the past 50 years. Now with the approval of Koscap’s new copyright royalty distribution system by the Culture Ministry, the turf war is shaping up between the two competitors, each trying to protect their sources of income - their members - from switching to the other association.

Komca’s members, though, asked the public not to see this as a mere conflict with a new competitor, saying that the new copyright royalty distribution system was “unfair” and would “ultimately crush the country’s K-pop market.”

Members of the Komca illustrating their contention that general music is far superior to background music in the effort required to produce it. Their dramatization was part of a news conference where they denounced a rival royalty distribution group that treats both types of music equally. [Newsis]

So far, under the monopoly system at Komca, the fees paid by broadcasting stations for using music in their programs had to follow a “differential payment rate system” in which the payment fee differed depending on the type of music. Background music royalties are only about a tenth of those paid for “general music,” songs with lyrics like K-pop.

But the new Koscap proposed a system that does not differentiate between background and general music, but charges royalties based on the length of the music clip used by the broadcasting stations. In short, this new system does not regard the two types of music as different.

“This system is to reform the existing copyright royalty distribution system that has been somewhat unfair to the musicians of minor genres like the writers of background music,” an official at Koscap said. “We tried to come up with a system that allowed fair distribution depending on the level of contribution rather than the type of music.”

This new distribution system of Koscap was approved by the Ministry of Culture, Sports and Tourism in April.

It might seem strange for Komca members to be angry at Koscap’s new system, because the royalty distributions are applied only to its own members. So why are leading musicians like rock guitarist Shin Jung-hyeon, composers Joo Young-hoon and Yoon Il-sang and singer-songwriters like Park Hak-gi and Yoon Jong-shin starting to denounce the ministry?

If members of Komca decide to switch to Koscap because they think the latter’s system is more favorable to them, Komca’s portion of the pie will get smaller. So, the bottom line here is that Koscap is likely to lure all the background music writers away from Komca, bolstering its numbers and enlarging its share of the pie. The losers will be the general music writers that get a better deal in Komca.

But Komca members explained the issue a bit differently.

“We are not angry because we now have competition that can steal away our members,” said Yoon Il-sang, a composer. “The problem is that the new system is unfair to the country’s general music writers because the amount of effort, time and people involved in creating general music is incomparable to that of creating background music.”

“How can a general music artist receive an amount of money similar to someone doing background music?” said singer-songwriter Yoon Jong-shin during the press conference. “Background music is only an accessory to TV programs while general music is a complete form of music that goes through lyric writing, music composition, rearrangements and so on.”

During the press conference, the members put on a small performance to illustrate “the different values of background and general music.” They printed a background musical score on a white banner and unrolled it as a suspense-filled passage was played for about 30 seconds. Then they brought out a thicker rolled-up white banner that had the score of Big Bang’s “Loser” and unrolled it while the song played for four minutes, trying to illustrate the levels of effort required for general and background music.

“As you can see, how can these two be treated the same?” composer Kim Hyung-seok appealed (Unsaid, however, was that the demonstration would have resulted in eight times more royalties to the pop song because of the differing time lengths).

Komca also argued that the system benefits specialized companies that supply background music, known as “libraries,” and about half of these suppliers are foreign companies.

“Koscap’s distribution system fills the wallets of foreign companies by taking money from local musicians,” said Yoon, the composer. “The Culture Ministry secretly approved Koscap’s system without informing us or even talking to us about the best system to benefit local musicians.”

Koscap called the complaints “outrageous” and a “distorted view.” It fired back at the charges of coddling foreigners by noting that many local background music composers have been unfairly discriminated against in compensation because of Komca’s former monopoly.

“Komca is taking issue with our system and only stirring up the music industry, making musicians who don’t really know much about the whole copyright system to feel anxious,” said an official from Koscap.

The Culture Ministry said it felt no necessity to obtain the approval of Komca members when approving the Koscap system, which applies only to musicians that are Koscap members. But it did back down somewhat, saying it would arrange a public hearing so that the two associations could work out their differences publicly.

Watching the conflict between the two associations, one culture critic, Lee Dong-yeun said, “Copyright issues are always complex and cause headaches for musicians. That is why the role of the Culture Ministry is very important.”

He continued, “The Culture Ministry should be the one to settle any conflicts that may arise, but in this case, it provoked the conflict even further by just approving the new system without encouraging enough discussion.”