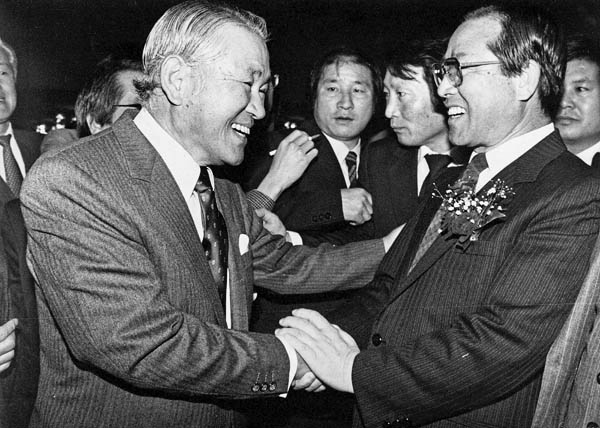 Lee Hu-rak, who served as Presidential Chief of Staff for nearly six years, was dismissed after the constitutional revision in Oct. 1969, which allowed a third presidential term for Park Chung Hee. But Lee wasn’t away from the center of power long. He returned as director of the Korean Central Intelligence Agency (KCIA) in December.

Lee was smart and a tactician. He was talented at fostering the idea that he was indispensable. That kept Park from eliminating him from the position.

Park was aware of what Lee was up to but needed Lee’s talents. First Lady Yuk Young-soo didn’t like Lee being named KCIA director because she was aware of Lee’s sexual escapades when he served as Ambassador to Japan. Yuk was sensitive about any kind of scandal affecting people around Park.

“Why do you keep a man like that?” she would say. “He’s not the right person to be with the president. You should kick him out.” 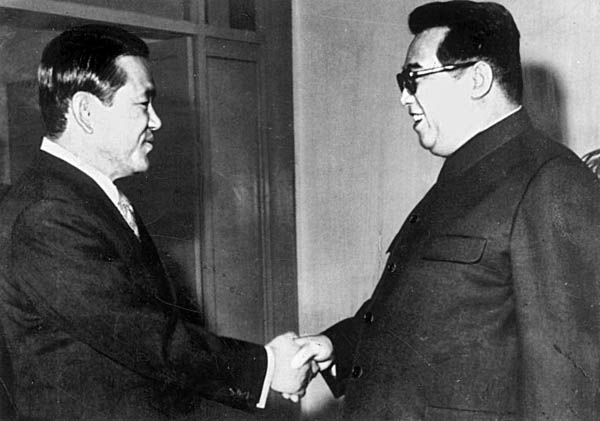 Lee must have felt vulnerable because of the first lady. But he maintained his position through shrewd maneuvering.

One of his best ploys was to meet Kim Il Sung in Pyongyang.

On April 26, 1972, as I was serving as Prime Minister, the Blue House called me in at 8 a.m. President Park held a meeting with Lee, Special Advisor on Foreign Affairs Choi Kyu-hah and Foreign Minister Kim Yong-shik. I heard of Lee’s visit to North Korea for the first time.

Lee said Jeong Hong-jin, a KCIA official who took part in an inter-Korean Red Cross meeting, had a behind-the-scenes meetings with North Korean Red Cross official Kim Deok-hyeon. They arranged meetings in Pyongyang between Lee and Kim Il Sung’s younger brother, Kim Yong-ju. What was even more surprising was that it was all Lee’s idea.

With a determined face, Lee said, “I’m going to Pyongyang to let historians in the future know how hard you, Mr. President, tried for peaceful unification. I’m prepared to die in the worst case.”

Park must have been curious about how the North Korean leader would respond. I didn’t say anything but thought Lee was particularly daring. Lee took out a document, which was entitled “Business trip in a special area.” In order to visit enemy territory, he needed the approvals of the Prime Minister and Foreign Minister. Minister Kim and I signed the paper and handed it to Park.

On May 2, before he departed for Pyongyang, Park and I met Lee at the Blue House. He withdrew a small envelope from a pocket.

“T-t-t-this,” he stuttered, “is potassium cyanide. If need be, I’m going to swallow it and die.”

He stuttered when he got nervous.

Park recognized his courage and said, “Do a good job!”

Lee stayed in Pyongyang from May 2 to 5 and met with Kim Il Sung twice. Kim praised Lee as a hero. After Lee came back to Seoul, he proudly reported, “Kim Il Sung agreed to many of my ideas and complimented me.”

“Our people don’t believe you at all,” Park told him. “You talk about peace at one point but then you try to assassinate me by sending Kim Shin-jo and his team.

“Go back and tell your leader that the North can only gain our trust by putting his words into action.”

This is how the two Koreas secretly met for two months.

At 10 a.m. on July 4, 1972, KCIA Director Lee held a press conference at the agency headquarters in Imun-dong, eastern Seoul, and announced the July 4 South Korea-North Korea Joint Communique. At the same time, Pak Song-chol made the same announcement in the North. The entire country was shocked but deeply moved by the communique.

The communique agreed to by Lee and Kim Yong-ju had seven items and the gist were three principles of unification, which were independence without interference by foreign powers, peace and solidarity of the Korean ethnic group. The media inside Korea and around the world all reported that unification was not far away.

On the next day, I attended a hearing about the communique at the National Assembly. Rep. Kim Young-sam of the New Democratic Party (NDP) asked, “What does the foreign power reference mean in the principle of independent unification? Are you admitting that North Korea is a regime on parity with us?”

I replied, “The UN isn’t part of the foreign powers stated in the communique. History teaches us how difficult it is to talk to communists. We can’t trust what they say entirely yet. Talks will be a way of seeking peace between the two Koreas, and our ideology and lives won’t be affected a bit.”

Disputes between the South and North continued. In joint committee meetings that began in Oct. 1972, the North demanded the withdrawal of U.S. forces from Korea and the abolishing of the National Security Law.

People criticized the South Korean government for accepting the three unification principles unilaterally suggested by Kim Il Sung. But actually, it was Lee who suggested the principles to make sure his visit to the North was a success.

Park did not attach much significance to the joint communique and thought it wouldn’t be fulfilled. On the contrary, he worried about the agreement resulting in unexpected situations on the peninsula.

At the time Park was preoccupied with the Yushin Constitution, which came into effect in Oct. 1972 and gave him dictatorial powers. Lee made sure he got all the attention surrounding the inter-Korean talks.

After the communique was announced, Park held a meeting with ministers involved in national security.

Lee attended and abruptly said, “I think we should abolish the National Security Law since the North is trying to talk with us.”

I immediately shouted, “What are you thinking? The National Security Law isn’t intended to regulate or suppress individuals. Even communists won’t get punished if they abide by the regulations. Since it doesn’t have any impact on innocent people, it is illogical to abolish the law.”

I continued: “Don’t ever say that again. And you won’t be going to the North again.”

During our argument, Park didn’t say a word and simply left the room. He was mad about Lee’s remark but he didn’t scold him in front of everyone.

When the argument died down, Presidential Chief of Staff Kim Chung-yum went out and brought Park back in. After looking at the president, Lee never brought it up again.

Without me scolding him, he may have persuaded other ministers to abolish the National Security Law. I still don’t know why he tried to abolish the law, but I believe he was affected somehow when he visited Pyongyang. Probably he wanted to give Kim Il Sung a present in return for Kim’s compliments.