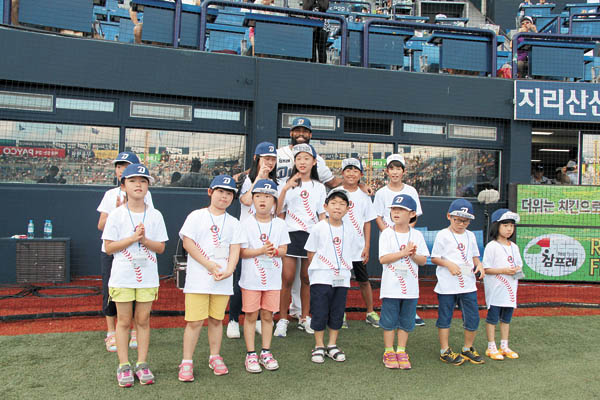 On Saturday in a game against the Doosan Bears, Eric Thames of the NC Dinos was on fire. The 28-year-old American, who is currently the league leader in RBIs and second in batting average and home runs, went 3 for 3 and scored two runs to help his team to an 8-5 victory in front of their home fans.

But what might have boosted the Dinos lefty slugger’s power even more was that he was also playing in front of children he invited to the stadium.

Thames asked about 20 children from the Goseong Orphanage, their teachers and volunteers to the Masan Baseball Stadium in Changwon, South Gyeongsang, for a “Day at the Game.” According to the Dinos, the former Toronto Blue Jays and Seattle Mariners athlete covered all the costs for 70 people to watch the Dinos-Bears contest, including transportation, game tickets, snacks and souvenirs.

“I’m happy to deliver a victory in front of the kids,” he said. “I think the support of children and the sellout crowd gave us power.”

Thames also attended a fundraiser at a local bar, Biskachy, on July 16, where he greeted 400 supporters. He sold T-shirts and donated his signed uniforms and equipment to raise money for the orphanage.

“He did ask for a few things from the team, but the event was entirely organized by Thames and his agent,” said an official of the Dinos. “We will actively support what is needed for his campaign.”

On July 16, the Dinos tied the SK Wyverns 2-2 before play was halted after 12 innings. But his teammates Kim Tae-goon, Park Jong-ho, Park Min-woo, Lim Chang-min, Choi Keum-kang and Zach Stewart also showed up at Biskachy after the game to help out. They were joined by Dinos manager Kim Kyung-moon, who arrived as it was going on.

“I have been made so welcome since I arrived in Korea - by the NC Dinos, by my teammates, by the fans and by the Korean people,” Thames wrote on his Facebook page on July 6. “I want to give something back.”

About 5 million won ($4,290) was raised through the event, and the money was delivered on Saturday. Thames had a group photo taken with the orphans; after hearing of the Dinos slugger’s campaign, the Association of Korean Medicine also joined the cause, presenting gift vouchers to children.

“We were moved by Thames’ kind campaign,” said the association’s spokesman, Kim Ji-ho. “We also prepared little gifts, hoping the children will have good memories and dreams.”

Thames is not the only Korea Baseball Organization import who has returned some love with a charity event. To combat the impression that foreign players in the KBO are mercenaries who like to earn big bucks before returning home, more foreign players are stepping up to give back to their local communities.

Dustin Nippert of the Doosan Bears and Josh Lindblom of the Lotte Giants have also invited children to the baseball stadium this season.

Nippert, in his fifth season in the KBO, invited 50 children from the Changdong Welfare Community Center to a game against the Nexen Heroes at Jamsil Baseball Stadium in Seoul on July 3. The 34-year-old American did the same thing twice last year and in 2013 paid for about 1,000 children to attend his team’s games.

Lindblom, a KBO rookie, invited 20 children from the Jongdukwon Social Welfare Foundation to Sajik Baseball Stadium in Busan on July 5, when the Giants played the SK Wyverns. The 28-year-old, who previously played with the Los Angeles Dodgers, Philadelphia Phillies and Texas Rangers, gave the children presents and jerseys while they had dinner with the team.

Lindblom is no stranger to helping those in need. Before coming to Korea, the Indiana native set up a foundation with his wife to support children in need, and the foundation vowed to keep up the good work here.