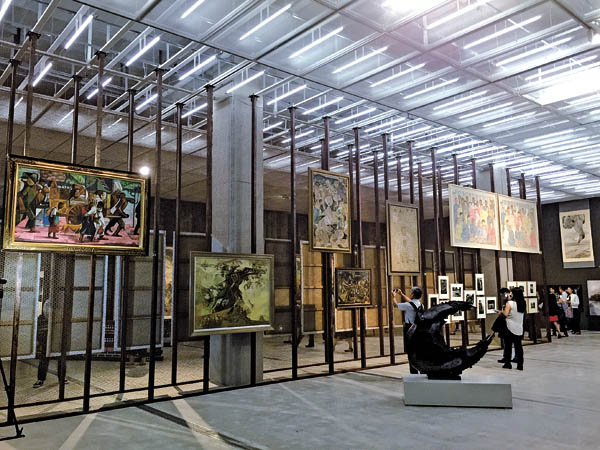 The first section of the “Uproarious, Heated, Inundated” exhibition features art works about the Korean War and postwar life. The exhibition was designed by artist Choi Jeong-hwa. By Moon So-young

Works of visual art have always been an important means of experiencing the past, and visitors to a new exhibition at the National Museum of Modern and Contemporary Art’s Seoul branch will see that this remains true.

The exhibition, titled “Uproarious, Heated, Inundated,” showcases 270 pieces by 110 artists, selected by the museum to examine Korea’s history since its 1945 liberation from Japanese colonialism. The works are divided into three sections.

Section 1, “Uproarious,” focuses on the 1950-53 Korean War and life in postwar Korea. Section 2, “Heated,” explores the nation’s rapid industrialization and urbanization in the 1960s to ’80s. Section 3, “Inundated,” examines Korean society since the 1990s, with its diverse values and hybridized culture.

“Each section is filled with the voices of multiple artists, both those who actually experienced the period and those who indirectly experienced it through records and documentation,” explained Kang Seung-wan, head of the museum’s curatorial department. 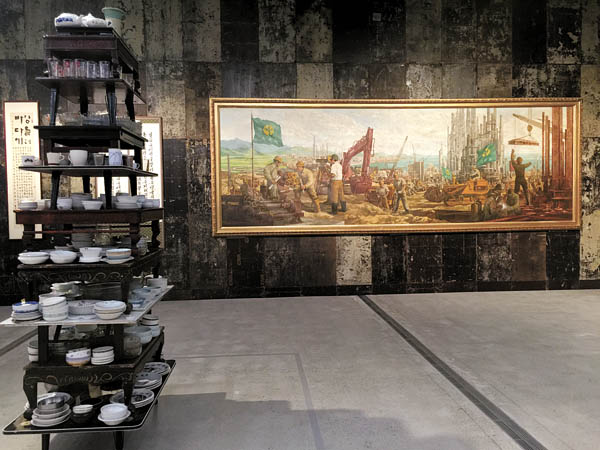 The second section is about industrialization. Choi’s installation, left, and Chung Chang-sup’s painting, one of the “National Historical Paintings.” are shown. By Moon So-young

“Uproarious” includes legendary editorial cartoonist Kim Seong-hwan’s Korean War drawings he made as a military painter. It also includes photos by Limb Eung-sik and Joo Myung-duck that capture ordinary people’s lives and struggles to survive during and directly after the war. Works by many other artists deal with the loss of family members during the war.

But the art of those born in the late 1960s and later have different tones. A video by Jeon Jun-ho, born in 1969, touches on the issue of separated families but takes a more complicated approach.

His video deconstructs the Statue of Brothers, a famous monument in Seoul. The statue depicts the true story of a family’s older brother, a South Korean officer, who happened to meet his missing younger brother, who became a North Korean soldier, on the battlefield during the Korean War.

The original statue shows the brothers hugging each other, but in Jeon’s video, they are separated despite staying in the hugging pose. They move as if dancing according to a cheerful waltz, though they never come into contact. The video, bitterly humorous, seems to symbolize not only the separated families but also the two Koreas, which are repeatedly failing to reach reconciliation. 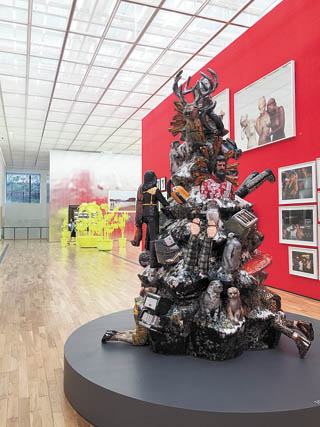 The third section portrays Korean society since the 1990s, with its diverse values and hybridized culture. By Moon So-young

If those works were hanging on typical white walls, they might look out of place. But they are arranged on dark walls or piles of wire, lending to the seriousness of the section.

“The exhibition space starts off with dark colors in section 1 then gradually lightens up in color and mood in sections 2 and 3,” Kang explained. “The walls capture the aura of each period through the use of different materials.”

The exhibition design was created by Choi Jeong-hwa, one of the most famous Korean artists in the international scene. His work is also on display in section 3, alongside Hong Kyoung-tack’s splendid pop art and Bahc Yiso’s conceptual installation.

Another must-see of the exhibition is Chung Chang-sup’s “Construction of Economy” in section 2. It is one of the “National Historical Paintings,” shown for the first time at the museum.

The paintings were created under the 1963-79 Park Chung Hee regime to reproduce important scenes of Korean history, from the ancient wars to industrialization, in the style of the 19th-century European historical paintings. Today, most have been forgotten.

Chung’s painting depicts a site of construction amid Korea’s rapid economic growth. The painting is ironic in many respects, as Chung is a famous abstract painter and the painting resembles a work of North Korean realism - even though it’s propaganda of the anti-communist regime.

Alongside the painting are works that carry positive, negative and mixed views on Korea’s industrialization.

“Reflecting on the past doesn’t mean just recalling and restoring the bygone time period as it was, but instead means constructing a ‘site of memory’ where multiple, diverse and different memories are reconstituted in the present,” the museum said on its web site.