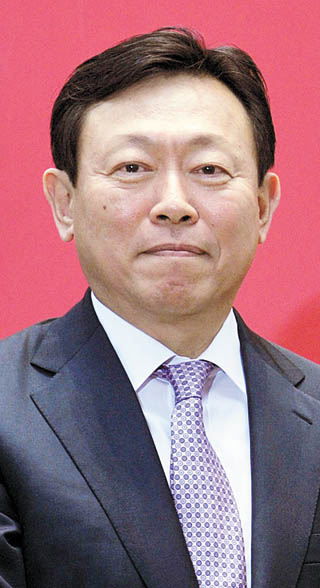 A fraternal battle to control all of Lotte Group, a corporate behemoth in both Korea and Japan, has led to the fratricidal demotion of founder Shin Kyuk-ho, who was replaced as the controlling chairman by his own son.

Although it is not uncommon for members of founding families of companies to squabble over management and who becomes CEO, it is highly unusual for a father to be elbowed out by his own son - and in this case not even his firstborn but his second son, Shin Dong-bin, 60, who officially clinched control of Lotte Group operations in both Korea and Japan two weeks ago.

Older brother Shin Dong-joo, 61, was vanquished in that battle.

Lotte Group in Korea confirmed on Tuesday that the board of Lotte Holdings, the de facto holding company of Japan’s Lotte Group, voted to remove General Chairman Kyuk-ho, 92, from his post Tuesday.

The board bestowed on the elder Shin the title of honorary chairman, indicating he would not directly engage in business and management decisions.

The younger son, Dong-bin, will keep his titles of CEO of Lotte Holdings and Chairman of Korea’s Lotte Group.

The announcement came a day after Kyunk-ho’s eldest son, Dong-joo, was believed to have attempted a coup against his younger brother - with his father’s assistance.

Lotte Group acknowledged earlier reports that Dong-joo on Monday traveled to Japan with his father, as well as several relatives, including his older sister Shin Young-ja, 73, and his cousin Shin Dong-in, 69, where they announced the dismissal of six board members, including Dong-bin and Lotte Holdings CEO Takayuki Tsukuda.

The only one not included on the list was the founder himself.

Lotte Holdings on Tuesday held an emergency board meeting, where the founder’s order was nullified. It was not approved by the board, the board said.

“[Lotte] will undergo processes to have [Shin Kyuk-ho] named as honorary chairman,” the company said in a statement released on Tuesday.

“The decision was made solely by Lotte Holdings’ board of directors and is not related to the business in Korea,” the company stated, “Still, [Lotte] will keep [the founder] Shin informed of the progress and details of business.”

Lotte Group declined to comment on why its own founder abruptly attempted to oust the board, including his second son. Observers suspect the older son was behind the founder’s move. 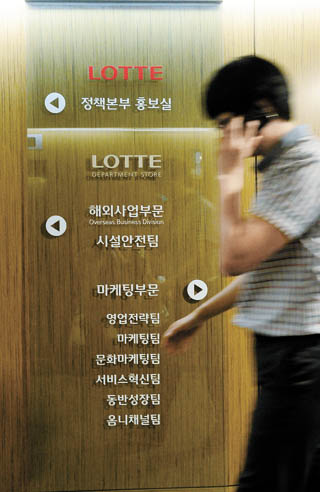 “Although Honorary Chairman Shin is not suffering from dementia, because of his advanced age, he sometimes cannot make normal judgements on situations,” said a high-ranking executive at Lotte Group. “The eldest son kept visiting his father after he was relieved from his post as Vice Chairman of Lotte Holdings, asking for forgiveness and saying he would do well.”

The feud between the two brothers over management control dates back to 2013, when they started to compete with one another in buying shares of the retail giant.

Through August 2014, the older brother increased his stakes in Korean affiliate Lotte Confectionery with roughly 12 purchases from 3.48 percent of the company to 3.92 percent.

The younger brother bought 10 billion won ($8.6 million) worth of the same company’s stock, raising his stake from 4.88 percent to 5.34 percent.

In January, the older brother was stripped of his position as Vice Chairman of Lotte Holdings as well as other positions in its affiliates.

But the younger brother solidified control of Lotte Japan earlier this month during the group’s strategy meeting in Hanoi, Vietnam, when the slogan was “One Lotte, One Leader.” 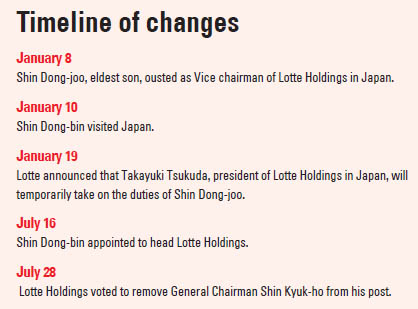 Analysts are wondering if the feud between the brothers will continue, since they own a similar amount of shares in Lotte affiliates.

The succession will be complete when either one has a controlling stake in Lotte Holdings’ affiliate Kojyunsya Co. The company, which was founded in 1967, is a small business specializing in packaging.

But it is the largest shareholder of Lotte Holdings, with a 27.6 percent stake. It also owns 5.45 percent of Lotte Hotel, which is a de facto holding company of Korea’s Lotte Group.

Honorary Chairman Shin is the CEO of the packaging company, with a 3 percent stake. Each brother owns 29 percent.

Some of the country’s biggest business groups, including Samsung and Doosan, were scenes of intense familial battles to gain control.

The family that controls Doosan started warring after Park Yong-sung, the third son of founder Park Doo-byung, took over the group from his elder brother Park Yong-oh in 2006.

Angered, the elder son filed a complaint with prosecutors that revealed his younger brother had a secret fund amassed through embezzlement and accounting fraud.

Samsung Chairman Lee Kun-hee was also once the protagonist in a family drama. The chairman engaged in a public squabble with his elder brother and sister over the fortune amassed by their father, the late Samsung founder Lee Byung-chul.

Lee Maeng-hee, the elder brother of Lee, accused the chairman of secretly managing the fund that should have been shared with his siblings, though the chairman denied the accusation.

Shin Kyuk-ho, who is Korean-Japanese, founded the retail and confectionery giant Lotte Group in Tokyo in 1948. It was in 1967 that the Lotte Group entered Korea.