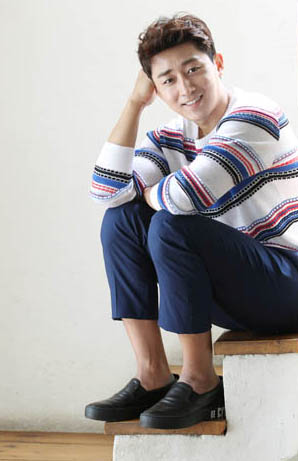 After the series ended, the 31-year-old continued making inroads on the small screen, but this time through appearances on variety shows.

He was cast in the spinoff version of star producer Na Young-seok’s flagship reality program “Three Meals a Day,” and was a former regular on tvN’s popular food show “Mr. Baek: The Homemade Food Master.”

But on air, Son rarely succeeded in eliciting laughs or making witty commentary - what such programs thrive on. Yet, whether it was intended, Son had a distinctive charm and was a polite presence who brought out the best in his fellow cast members.

It’s not as though he hadn’t thought of better words to lift the mood, he said, but as an actor whose job isn’t necessarily to be funny on a variety show, he felt it was rude of him to cut off other people’s words just for the sake of comedy.

Son currently appears in the lighthearted comedy “Three Summer Nights,” now screening nationwide, which has been likened to the “Hangover” series.

In a recent interview with Ilgan Sports, an affiliate of the Korea JoongAng Daily, he talked about his acting aspirations and his struggles appearing on variety programs.

The following is an edited excerpt of the interview:

Q. Why did you decide to star in “Three Summer Nights”?

A. I read the script so enthusiastically, as if I was reading a comic book. I was also a longtime fan of director Kim Sang-jin’s previous comedic work, like “Attack the Gas Station!” (1999) and “Kick the Moon” (2001).

How was working with your colleagues Lim Won-hee, Kim Dong-wook and Yoon Je-moon?

None of them are outgoing types. Kim [Sang-jin] really tried to break the ice, setting up a dinner and drinks where we could hang out. It became comfortable after that.

What was it like shooting a romantic scene with your on-screen love interest?

That scene wasn’t part of the original script and was made on-site. Acting that part wasn’t too challenging because the director gave very detailed directions. I interpreted the scene in a comical way.

You’ve appeared frequently in reality shows as well. How was the response from the public?

I’ve read many comments online that say that I’m “boring” and that people don’t understand why I keep showing up on these programs. Honestly, sometimes I don’t even know why the producers keep calling me. I get mad at myself when I see myself saying dull things. But it’s not like I’ve always been so clueless. It just didn’t feel right to intrude with my jokes while the others weren’t finished talking, so I look out for the right timing, but then the subject of the discussion changes.

Do you want to excel in variety programming?

I don’t have a special interest in shining on variety shows because my profession resides in acting. It’s like I am standing in between those who have a special penchant for variety shows, and I don’t see myself as righteous trying to claim their crown.

However, I do have a passion for acting, and I would like to hear positive comments about me in that regard.