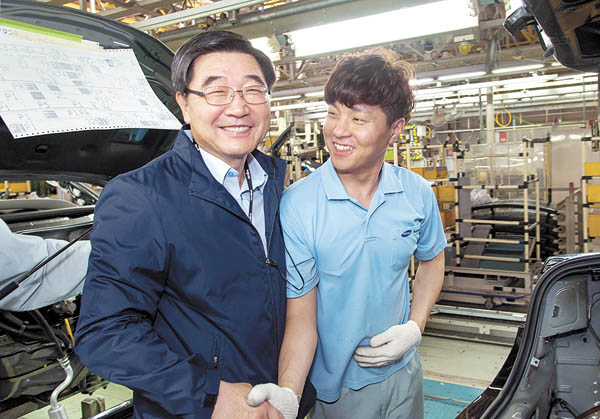 Labor Minister Lee Ki-kweon, left, greets an employee of Renault Samsung Motors on a visit to the company’s plant in Busan on Tuesday. The company was the first automaker to complete this year’s wage negotiations without labor-management disputes. Provided by the company

Hyundai Motor held its 15th round of wage talks with its union at the Ulsan plant in South Gyeongsang, but failed to reach an agreement.

The union wants the company to raise the monthly base pay by 159,900 won ($137), a 7.84 percent rise from a year earlier, and to pay out 30 percent of the company’s net profit as bonuses to workers. It also wants Saturdays designated as paid holiday days.


The union also wanted the company to adjust the current double shift system, in which one shift works eight hours while the other works nine. It wants both shifts to be eight hours a day. In 2012, management and labor agreed to even out the shifts in March 2016, but the union now wants the new system earlier.

It has also proposed the company invest about 282 billion won to expand the production facilities, which the labor union thinks is necessary to keep current productivity after working hours are reduced.

The company said it needs to improve the productivity level before it invests.

According to the company, the hours per vehicle (HPV) index, which calculates how much time it takes to manufacture a car, was 26.8 hours last year for vehicles produced in Korea, which was the worst among all of Hyundai’s plants. The HPV was 14.7 hours in the United States, 15.3 hours in the Czech Republic, 17.7 hours in China and 16.2 hours in Russia.

Lee Won-hee, the company’s financial chief, said in a recent press briefing that the company is considering building a second plant in the U.S. in order to meet growing demand, but the union worries the company is trying to relocate Korean jobs overseas. The union came under fire earlier this year, after it demanded the company discuss how much production was done in Korea and how much overseas. The demand was not accepted.

Investing more in low-productivity plants in Korea is a problematic idea for a company that is struggling. The company reported 3.38 trillion won in operating profit in the first half, a 17.1 percent drop from a year earlier, while net profit dropped by 13.8 percent during the same period to 3.77 trillion won. Hyundai is facing tough competition from rivals and slumping sales in newly industrialized nations.

But getting an agreement with the union is important. Last year, the company suffered a 910 billion won loss after the union launched a partial strike in August and September, which delayed the production of 42,200 cars. About 38 percent of Hyundai’s cars are made in Korea.

Other local automakers are wrapping up their wage negotiations. Renault Samsung Motors became the first company to finish negotiations this year, after the company agreed on July 23 to raise the base monthly pay by 2.3 percent, or 42,300 won, and adopt the peak wage system, which gradually cuts the wages of employees in the years leading up to their retirement.

“We were able to reach an agreement as both sides knew that we needed to improve the company’s productivity to increase our profitability,” the company said in a statement.

The nation’s third-largest automaker, GM Korea, wrapped up its negotiations Monday evening. The company said the union tentatively agreed to raising the monthly base pay by 83,000 won; the union had asked for a raise of 159,900 won. The deal will be finalized if the union approves it in a vote scheduled later.

“It hasn’t been easy every year,” Hwang Kwan-sik, a spokesman for Hyundai Motor told the Korea JoongAng Daily. “But since many of the demands made by the union were terms that we have been trying to resolve for a long time, we will try to wrap this up as soon as possible.”