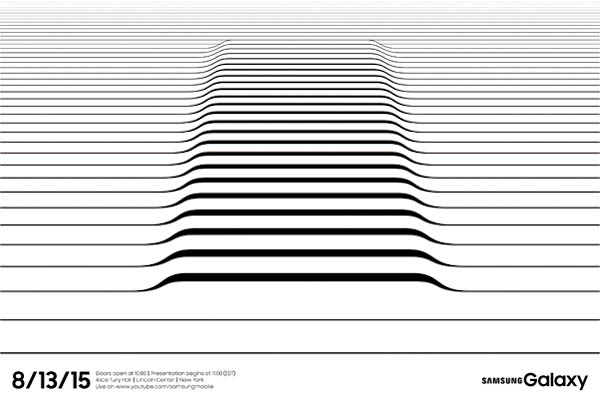 The invitation for Samsung’s “Galaxy Unpacked 2015” event. Provided by the company

Samsung Electronics officially announced on its blog that it will hold the Galaxy Unpacked 2015 event to unveil new smartphones on Aug. 13 in New York.

The smartphone giant is widely predicted to debut the Galaxy Note 5 and Galaxy S6 Edge Plus at the event, scheduled for 11 a.m. local time in Lincoln Center.

The image on the online invitation shows the shape of a phone with rounded edges on both sides of the screen, indicating the new S6 Edge Plus will have a similar design to the Galaxy S6 Edge flagship unveiled in April.

Analysts consider the early debut a strategic choice to avoid competition with Apple’s new iPhone 6S and 6S Plus, slated to be unveiled mid-September. Samsung insiders have concluded that sluggish sales of the Galaxy S6 and S6 Edge were in part due to consumers of premium smartphones having already purchased the iPhone 5S by the time Samsung’s phones were released.

The Galaxy Note 5, according to leaks and industry insiders, is set to include a 5.7-inch super AMOLED display, 0.1 inch larger than its predecessor Note 4, and a 16-megapixel rear-facing camera. The Note 5 will be powered by Samsung’s proprietary Exynos 7422 processor instead of Qualcomm’s Snapdragon. S6 Edge Plus is expected to have a screen 0.6 inches bigger than its previous version, at 5.7 inches.

The Unpacked event will be broadcast live on Samsung’s YouTube channel at http://www.youtube.com/samsungmobile.