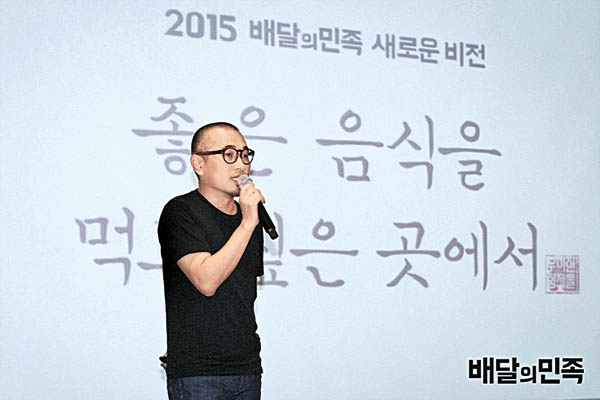 Kim Bong-jin, chief executive officer and co-founder of the country’s most popular food delivery app, Woowa Brothers, speaks at a press conference held at a hotel in Gangnam District, southern Seoul, on Tuesday. Provided by the company

Woowa Brothers, a five-year-old start-up operating the nation’s No. 1 food delivery app “Baedal Minjok,” announced Tuesday that it will scrap the hefty commission fees restaurants are required to pay, starting next month.

Restaurants currently pay the service between 5 and 9 percent of the price of the food delivered to customers. That means the service receives up to 900 won ($0.77) in commissions on an order worth 10,000 won.

The system has been a major dilemma for smaller restaurants, which are already losing revenue amid the stalled economy, but fear that refusing to participate in the service will make them even more vulnerable to competing restaurants.

“Commission fees actually make up almost 30 percent of our revenue,” said Kim Bong-jin, CEO and co-founder of Woowa Brothers, in a press conference on Tuesday. “We won’t immediately go bankrupt [from abolishing the commission] but the decision will definitely deal a huge blow to our revenue. But we have long deliberated on this issue, and today’s decision is meant to attract more customers, rather than enlarge our revenue, and will eventually help us last longer.”

Baedal Minjok, which translates to “delivery people” in Korean, posted revenue of 29.1 billion won and an operating loss of 15 billion won last year. The situation is predicted to worsen this year, Kim said, mainly due to the new policy.

Korea already has an established system for food delivery reliant on telephone orders. But delivery apps have become increasingly popular and now constitute 14 percent of the entire food delivery market, estimated at around 12 trillion won.

Baedal has a 57.1 percent market share among the three most dominant players. The two others, Yogiyo and Baedaltong, are both owned by Germany’s Delivery Hero. Baedal Minjok’s decision to lift the commission fees is likely to encourage these smaller players to follow suit.

Kim said Woowa’s plan to go public on the Nasdaq will be delayed up to two years since revenue will fall.

Speculation that the start-up was interested in listing on the overseas stock market grew after the company received a fourth round of venture funding worth $36 million led by Goldman Sachs Group last November.

Kim also introduced a few new services during the conference. Baemin Fresh, one of the new subsidiaries, will ship salad, bread, fruits and vegetables, as well as banchan (side dishes), from 10 p.m. to 7 a.m. to households and offices.

Baemin Riders, launched in June, has made it possible for customers to receive foods that are usually challenging to have delivered, like ganjang gejang (soy sauce-marinated crab) and beef cutlets. Such foods require more accurate delivery time than others to retain their quality, making them a challenge for earlier delivery services. Kim said the new offering, now confined to Songpa District in eastern Seoul, will expand to the southern Seoul area.