Experts to survey damage to pines at Mt. Kumgang

Experts to survey damage to pines at Mt. Kumgang 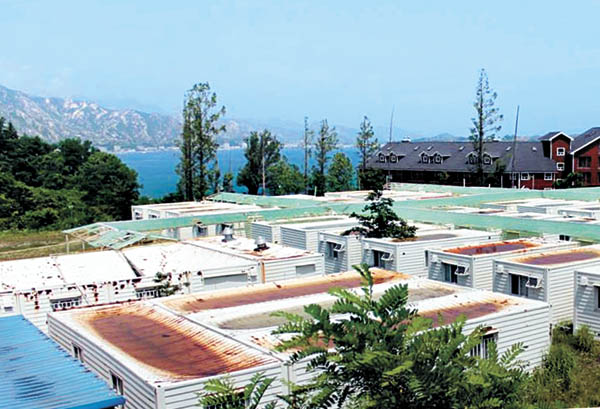 The roofs of the employee lodges at the Mount Kumgang resort have rusted and collapsed in the seven years since the inter-Korean tour program has been suspended. [JoongAng Photo]

A team of botanical experts and officials from the operating company in charge of tourism on Mount Kumgang are scheduled to visit North Korea today to survey damage to the pine trees there via Pyongyang’s request, which has served to fuel speculation about the fate of the suspended inter-Korean project.

According to the Ministry of Unification, the South Korean government approved the team’s application on Tuesday to visit North Korea. Five forestry experts and three officials from Hyundai Asan will visit the site from today until Friday.

Pyongyang made the request for the visit July 15, a ministry official said.

Of the five officials approved for the trip, four are members of the state-run Korea Forestry Research Institute. 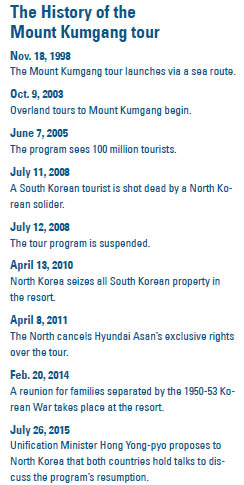 The pines, known as Kumgangsong here, are indigenous to the mountain area and parts of Gangwon. Their wood is high quality and is famous for having been used to build the palaces of the Joseon Dynasty (1392-1910).

The pines have yellowed over the past few weeks, and the team is set to investigate whether the damage was due to blight and insects or the recent drought.

“The North’s Asia-Pacific Peace Committee and the General Development Guidance Bureau for Mount Kumgang proposed the South Korean team’s survey,” the ministry official said, adding that the government will consider additional support based on the results of the investigation for the sake of the forestry cooperation with North Korea.

Since the announcement, speculation has grown that the trip will lead to the resumption of the Mount Kumgang tour, which has been suspended since July 2008. However, the ministry reacted with caution.

“The experts’ trip is a separate issue from the resumption of the tour,” the ministry official said.

The Mount Kumgang tourism program began in 1998 as a symbol of reconciliation between the two Koreas. Hyundai Asan, the North Korean business arm of Hyundai Group, operates the program.

But the tour was suspended following an incident on July 11, 2008, when Park Wang-ja, a 53-year-old Seoul resident, was fatally shot by a North Korean soldier during her vacation at the North Korean resort. The North claimed that Park had intruded on a military restricted zone and that the soldier had no choice but to shoot. It also rejected the South’s request for a joint investigation.

The tour program was halted immediately after her death, and the resort has since become a symbol of frozen inter-Korean ties.

A group of South Korean officials who recently visited the resort to conduct a site survey told the JoongAng Ilbo that the conditions of the once grand facilities have significantly deteriorated.

The roofs of the employee lodges have collapsed, while the outside walls of the family cabins were destroyed. The country club was also abandoned, photos taken by the team showed.

According to Hyundai Asan, losses are estimated to total 1.35 trillion won ($1.15 billion). In 2007, the resort saw 348,200 tourists, the highest since the program’s start, though it was directly hit by the suspension the following year.

The economy in Goseong County, Gangwon, where most villagers largely invested in accommodating tourists before their cross over the border, was also directly hit. Since the program was suspended, about 400 restaurants, cafes and lodges in the county have gone out of business ? a loss of about 272.5 billion won.

But the North was likely most severely affected by the suspension. The tour program was once a stable source of income for the poverty-stricken regime, and since 1998, about 1.95 million tourists have visited the resort, bringing in $487 million.

Seoul has hinted at its intentions to restart the program in displaying a more flexible attitude.

In his appearance with the KBS network on Sunday, Unification Minister Hong Yong-pyo said the two Koreas must sit down for talks to find a way to resolve the issues plaguing the Mount Kumgang project.

“The most important thing is for tourists’ safety to be guaranteed,” he said regarding conditions for the tour’s resumption. “The program was suspended because [a South Korean] tourist was shot dead at the Mount Kumgang resort by a North Korean soldier, so there must be systemic measures in place to assure the safety of our citizens there.”

Hong added that shortly after the incident, the North had promised Hyundai Asan chairwoman Hyun Jeong-eun that all tourists would be protected, but that words were not enough.

The resumption of the Mount Kumgang tour, he continued, is a separate issue from the economic sanctions that Seoul imposed on Pyongyang after North Korea torpedoed the ROK Cheonan warship in 2010. Known as the May 24 measures, the sanctions bar any investment and economic exchanges with North Korea.

“The North has demands, as does the South,” Hong said. “So I’m proposing that we meet and discuss them.”

Hong also proposed to North Korea that reunions for families separated during the 1950-53 Korean War be held around the Chuseok holidays in September.

The last such meeting took place in Feb. 2014 at the Mount Kumgang resort.