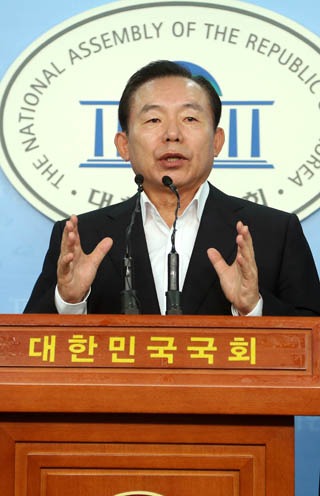 After President Park last week announced labor reform as a national priority, with the goal to complete the overhaul by the end of the year, the ruling party created a special committee, naming the six-term lawmaker as its leader. Rhee previously served as labor minister under the Kim Young-sam administration in 1993.

The committee held its first meeting on Tuesday, when it outlined the new roadmap, which includes plans to revise the Labor Standards Act to enforce the base salary system and reduce working hours.

“The party will create a reform plan soon and adopt it as the official position,” Rhee said at the press conference. “It will be sent to the National Assembly to be made into law. During the upcoming regular session, we will complete all the necessary legislative activities for the reform.”

In addition to the planned revisions to the Labor Standards Act, the special committee plans to modify the Employment Insurance Act and create a new law governing temporary workers to ensure job security, he said.

Rhee added that he will try to facilitate a social consensus on adopting the peak-wage system in order to complement the change in the retirement age.

Starting in 2016, the retirement age for those working at companies with 300 or more employees or public institutions will be extended to 60. Currently, the retirement age is 55. As most companies operate on a seniority-based wage system, the extension is expected to increase labor costs, with companies likely hiring fewer new recruits.

Under the peak-wage system, the salaries of older employees will peak a few years before retirement and then gradually decrease, allowing companies to save more money and hire entry-level employees.

When President Park talked about her determination to push forward with labor market reform, she singled out the peak-wage system in particular, asking for bipartisan support from the legislature, the business community and labor unions to realize it.

In his press conference, Rhee stressed the importance of introducing the peak-wage system as well.

“It will settle as part of the new culture of the labor market,” he said. “When the flexibility of employment is expanded, new jobs will be created and companies will be revitalized. That will help the entire working population.”

He also urged the Economic and Social Development Commission - a consultative body better known as the Tripartite Commission that comprises representatives from the labor, management and the government sides - to normalize its operations.

Rhee said his goal was to restart the commission in early August and produce an agreement by September.

“The commission has accomplished many things, but it broke down in the final stages,” Rhee said. “I am making an earnest appeal to the Federation of Korean Trade Unions, which walked out of the negotiation, to return to the talks as soon as possible.”

Rhee also urged another umbrella union, the Korean Confederation of Trade Unions, to participate in the talks to address the peak-wage system.

The union previously said it was willing to participate in the talks if a new consultative body was launched by the National Assembly.

Rhee, however, dismissed the demand. “The tripartite commission was created by law during the Kim Dae-jung administration to discuss and reach a consensus,” he said. “I don’t think it’s a good idea to create another consultative body.”

“We will accomplish labor reform during the upcoming session of the legislature,” Rhee continued. “All reform tasks are urgent, and this is our last opportunity. We must accomplish this through a dialogue.”