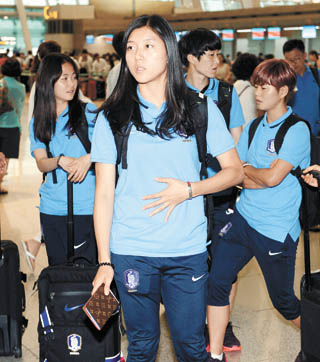 Defender Shim Seo-yeon and her teammates at Incheon International Airport on Wednesday, leaving for China for the EAFF East Asian Cup. [NEWSIS]

After their best finish in a FIFA Women’s World Cup last month, the South Korean national team left for Wuhan, China, on Wednesday, gunning for a title at the EAFF East Asian Cup. Their work is cut out for them.

The women’s team advanced to the knockout stage for the first time in a World Cup to the delight of local football fans. Coach Yoon Deok-yeo was promptly signed to a new contract after the quadrennial event.

After proving their competitiveness at the international level, the women’s team is now aiming for its second regional championship. South Korea won the inaugural East Asian Cup in 2005 with a record of 2-0-1, edging North Korea’s 2-1-0 record.

But the road to the trophy looks a bit bumpy. Among the four teams, South Korea has the lowest FIFA ranking, at 17th. Japan, which was the runner-up at this year’s World Cup, is 4th in the rankings, while host China, which reached the World Cup quarterfinals, is 14th. North Korea is the world’s No. 8.

“Our competitiveness doesn’t match these teams, but we want this tournament to help us grow more,” Coach Yoon said on Tuesday after team training at the National Football Center in Paju, Gyeonggi. “Instead of thinking about the results, we want to show that we can make a continuous effort and not give up easily.”

“The first match against China is most important, but North Korea is physically tough and Japan is the runner-up in the World Cup, so we have to play better,” Yoon said. “Fans have seen good matches [in the World Cup], so they will give us more attention and will also criticize us if we don’t perform. But any criticism will be a tool to strengthen our team.”

Six players have been replaced since the World Cup. Most notably, the team will have to play with a new offense line; ace playmaker Ji So-yun and strikers Park Eun-seon and Yoo Young-a are all absent because of club commitments or injuries.

“The tournament will give some motivation to new players,” Yoon said. “Ji and Park are absent, and I’m expecting more from Kim Sang-eun, Jang Sel-gi and Lee Geum-min.”

The players say the key to a good performance will be conditioning. The players first practiced at the center on Friday, then returned to their clubs a day later for WK League matches. They regrouped on Tuesday at the center, with little time for group training.

“After the World Cup, the players are tired, but we have to overcome that,” said midfielder Kwon Hah-nul. “Just like in the World Cup, we want to show some drama with a twist at the end at the East Asian Cup.”

Kwon, 27, will probably be the first female footballer in Korea’s “century club.” She has appeared in 98 national matches; her second appearance at Wuhan will bring her to 100.

“I’m proud to be a part of making Korea women’s football history,” she said. “Our goal is to win the tournament and give a good performance to move our fans’ hearts.”