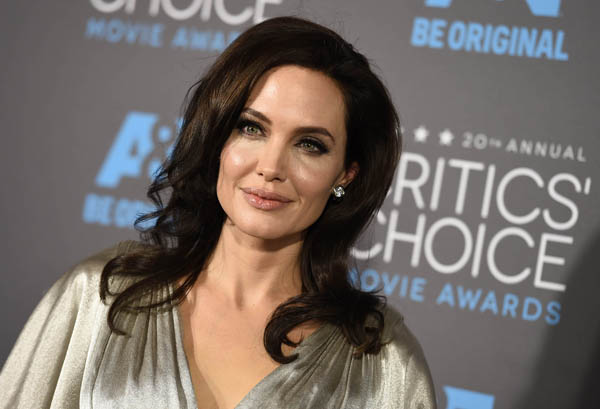 Angelina Jolie is teaming up with Netflix to direct a film adaptation of a Cambodian author’s memoir. [AP/NEWSIS]

To tell the stories of people in the country that touched her, she is directing a Netflix film on location based on a memoir about life under the Khmer Rouge, blamed for the deaths of 1.7 million people. And her Cambodian-born son Maddox will help with research and preparation for the film, Jolie said Tuesday in an email interview with The Associated Press.

Determined to give something back, she launched a foundation in Cambodia 12 years ago to promote community development alongside conservation.

This past weekend, she visited some of the projects of the Maddox Jolie-Pitt Foundation, which focuses on programs “to help local families overcome problems associated with poverty in the region and to help preserve the remarkable habitat and wildlife for future generations,’’ she said.

She’s slated to begin filming in November on the Netflix project, an adaptation of “First They Killed My Father: A Daughter of Cambodia Remembers,’’ author Loung Ung’s memoir of her childhood during the Khmer Rouge regime. Jolie recently directed the Louis Zamperini biopic “Unbroken’’ and is in post-production on the drama “By the Sea,’’ in which she also acts alongside her husband, Brad Pitt.

During her visit to Cambodia this week, Jolie agreed to answer a few questions from The Associated Press.

Q. Do you feel a political or social responsibility to tell the stories of Cambodia since Maddox was born there?

A. I feel a deep connection to Cambodia. I want to respect its history and bring a film to the world that will not only show the hardships of war but the dignity and resilience of a people I deeply respect.

As Maddox and I prepare the film, we will be side by side learning about his country. He is turning 14 next week and this is a very important time for him to understand who he is. He is my son, but he is also a son of Cambodia. This is the time for our family to understand all that that means to him and to us. My desire to tell this story in the most truthful and accurate way possible will be my tribute to the strength and dignity of all Cambodian people.

There are so many gruesome stories from those who lived through the horrors of the Khmer Rouge. What about this particular story do you feel needs to be told on the big screen?

The intent of this project is not to revisit the horrors of the war but to bring to the screen characters that people around the world will empathize with, and to help other people to learn about Cambodia.

What is special about this particular story is that it is told from the perspective of a five-year-old child and is based on a child’s emotional experience of war. It sheds light not only on the experience of children during the genocide in Cambodia but of all children who endure war.

Will Maddox be involved with the film or production?

Maddox will be on set every day after school and involved behind the scenes. And yes, Maddox is already involved in the foundation and will take over my role when he is older. AP