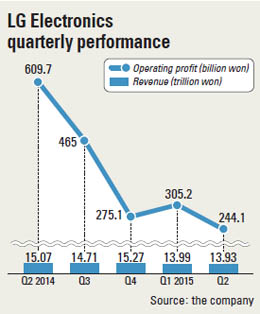 LG Electronics said in an earnings report on Wednesday that its operating profit for the second quarter dropped 60 percent from its mark a year earlier to 244.1 billion won ($211.2 million), far below the analysts’ consensus of just over 300 billion won.

Sales revenue in the quarter ended June 30 and fell 7.6 percent year on year to 13.93 trillion won, “in light of a sluggish global TV market and intense competitive pressures,” the company said, describing the quarterly earnings results “modest for an extremely challenging environment.”

The company cited the weak global market for LCD TVs - most notably in the former Soviet satellites, Latin America and Europe - and soft global demand and negative currency effects as the key reasons for the poor performance.

The mobile communications division, LG’s smartphone arm, posted second-quarter operating profits that tumbled from 72.9 billion won in the first quarter to a mere 2 billion won in the second, which it said stemmed from weaker demand in the premium segment in the domestic market. That near-zero operating margin, analysts said, was a result of heavy spending on marketing the G4 flagship smartphone, which has shown disappointing sales.

The company, now the world’s fifth-largest smartphone producer, sold 14.1 million handsets, down 8.4 percent from the previous quarter. LG initially set 70 million units as its sales target for 2015; its first-half sales were only 42 percent of the pace necessary to meet that goal.

The prospects for LG in the second half are even grimmer; its larger competitors Samsung Electronics and Apple will roll out new models.

“A chain of new smartphones from rival brands to debut in the second half will make it even more difficult for LG to achieve the 70 million units objective for 2015,” said Kang Bong-woo, an analyst at LIG Investment & Securities.

“Even though the first half was a high demand season, the share price of LG Electronics did not bounce back because of aggravated profitability in TV and intensified competition in smartphones,” said Greg Roh, head of the research center at HMC Investment & Securities. “A noticeable change in the second half does not seem likely.”

But LG Electronics boasted in its earnings report that it had sold more than 8.1 million LTE smartphones worldwide in the quarter that ended June 30, a record figure.

“In the third quarter and beyond, LG will more aggressively implement its dual strategy focusing on both premium devices and mid-range smartphones targeting emerging markets,” the company said.

The home entertainment and mobile communications divisions accounted for more than half of LG Electronics revenue in the April-June period. The leading contributor to revenue, however, was the home appliance and air solutions division, which deals in refrigerators and air conditioners. It accounted for 32 percent of total revenue.

Shares of LG Electronics closed up 1.7 percent at 43,800 won on Wednesday.