Lotte scion shores up support with his board

Lotte scion shores up support with his board 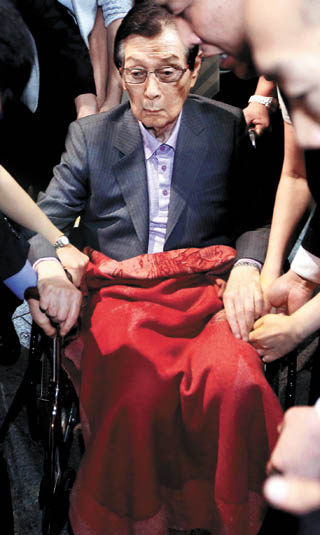 Shin Kyuk-ho, founder of Lotte Group, arrives at Gimpo International Airport from Tokyo on Tuesday night in a wheelchair. Although surrounded by reporters following news that he was ousted as group leader by his own son, the senior Shin made no comment. By Park Jong-keun

Shin Dong-bin, chairman of Lotte Group and CEO of Lotte Holdings, is cementing his grip over the retail behemoth after a succession scuffle that ended up with his father, Lotte founder Shin Kyuk-ho, 92, being forced out as chairman.

The 60-year-old second son held an emergency meeting in Japan on Tuesday with nine key executives of Lotte Holdings, the unlisted de facto holding company of Japan’s Lotte Group and the focus of the fraternal battle.

“Please keep up the good work and don’t waver,” the chairman was quoted as saying by a source at Lotte Group.

The chairman is seeking the understanding and support of the company’s board, telling them, “This is a part of the process to make more sound corporate governance.”

Shin Dong-bin is trying to defuse criticism of a son overthrowing an aged and frail father, a rare and unsavory occurrence in a highly Confucian country like Korea.

Local media outlets reported that Shin Dong-bin expressed regret in the meeting that his older brother, Shin Dong-joo, 61, accompanied the patriarch to Japan on Monday and reportedly tried to oust Dong-bin and other directors from board seats with the support of his father.

In response, the board of Lotte Holdings voted to remove General Chairman Shin Kyuk-ho, 92, from his post Tuesday, a coup de grace that many see as engineered by Dong-bin.

The younger son has been staying in Japan to manage the businesses of Lotte’s Japanese units after he took over Lotte Holdings two weeks ago.

The younger Shin was scheduled to return to Korea Wednesday but extended his stay in Japan. The father and some of family members returned from Japan Tuesday night at Gimpo Airport.

The younger Shin echoed his intention to restore order to the group in a message sent to workers of Lotte Group in Korea.

“The corporate value that Lotte has strived to build should not be weakened because of an individual’s family issues,” he said in the statement, admitting friction among his family members.

“[I] will try my best to lead constant growth of Lotte and develop the company into a global enterprise.” 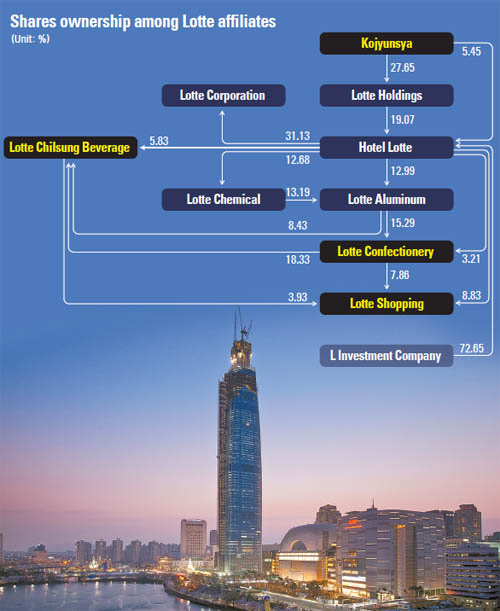 After the dramatic turn of events, there were many questions about the state of patriarch Shin Kyuk-ho and his intentions in traveling to Japan this week.

A series of anecdotes and remarks by Lotte sources indicate that the founder is not in a good shape, neither mentally nor physically.

When he toured Lotte World Mall in Jamsil, southern Seoul, in May, he looked very frail.

Conversations did not go smoothly as Shin appeared to have a hard time understanding what executives said.

Noh Byung-yong, CEO of Lotte Corp., had to speak loudly to let the founder know where he was in the mall.

“After a fall and a hip operation in 2013, his health deteriorated,” said a source at Lotte Group.

Despite the drama and ousting of the senior Shin, the market cheered the shift in management control and appears to put high hopes on the new chairman.

Shares in Lotte Shopping closed 6.55 percent higher on Wednesday after an earlier surge of 13.1 percent.

Shin Dong-bin owns a 13.46 percent stake in Lotte Shopping as of the end of March while Shin Dong-joo held 13.45 percent.

The eldest son owns 3.95 percent in Lotte Confectionery and his younger brother held 5.34 percent as of March 31.

But market watchers took more interest in the unlisted holding companies in Korea and Japan that ultimately control the sprawling businesses.

At the top of Lotte’s affiliates in Korea is Hotel Lotte, an unlisted de facto holding company of the Korean operations.

But above Hotel Lotte is Lotte Holdings in Japan, which controls a 19.07 percent stake in Hotel Lotte, making the CEO post at the Japan-based holding company the most important.

Until January, Dong-joo served as vice chairman of Lotte Holdings, but the younger brother took the helm at Lotte Holdings earlier this month.

Controlling Lotte Holdings is affiliate Kojyunsya Co., a packaging company that is the overall key to control of the group.

The founder owns a 3 percent stake in Kojyunsya, while each brother owns 29 percent.

The two brothers have comparable stakes in affiliates and holding companies, which suggests more corporate battles are on the horizon.

The vanquished older brother might fight back after increasing his stakes in the Lotte units.

Still, the victorious second son will not be easily defeated.

Employees of Kojyunsya own 12 percent of its shares, and they allegedly support the second son.

A high-ranking official at Lotte Group said that the younger son’s standing is sound in both Korea and Japan.

“Executives and board members of Lotte Holdings have a great amount of trust for Shin Dong-bin, since he has led a successful performance by the Korea unit,” the source said.

“They would acknowledge that the elder brother isn’t fit to drive further growth in Lotte Holdings.”