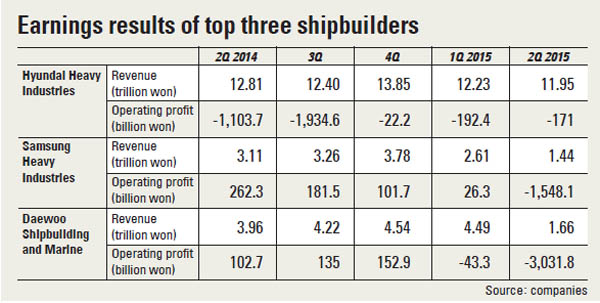 Daewoo Shipbuilding & Marine Engineering, the world’s second-largest shipbuilder, saw the biggest operating loss of the three in the period ending June 30, at 3.03 trillion won, with its revenue almost half that amount at 1.66 trillion won.

“The size of the losses grew bigger due to rising costs from delays in the process of building rigs for Songa Offshore, semi-submersibles, in which we are unexperienced,” said the troubled shipbuilder in a regulatory filing, adding that earnings should improve in the second half of the year.

Songa Offshore is known to have requested multiple design and specification changes for the four rigs it ordered.

Concerns rose two weeks ago that Daewoo has concealed a cumulated loss of nearly 2 trillion won generated last year, and Wednesday’s report proved such fears valid. Given the urgent situation, the company broke its past rule of not disclosing the second- and fourth-quarter performances. It also advanced the date of disclosure from early next month to Wednesday to match the other two players.

After the filing, financial authorities and creditors, including the state-owned Korea Development Bank, confirmed an earlier decision to review the company’s finances.

Samsung Heavy Industries, the smallest among the three, reported an operating loss of 1.55 trillion won in the second quarter, far worse than the 343 million won loss analysts were expecting. The company’s second-quarter net loss was 1.15 trillion won, compared to the 28 billion won profit analysts were anticipating.

Top player Hyundai Heavy Industries saw the smallest losses, at 171 billion won. The company explained the losses came from costs rising due to the delayed delivery of special vessels, rising fees for installing facilities overseas and the distribution of bonuses and severance pay during the period. Revenue tallied 11.9 trillion won for the second quarter.

“The losses can be attributed to offshore projects that cost more than the companies anticipated, and fierce competition between the three major players that led to unreasonably low pricing to win more orders,” said Heo Pil-seok, CEO of Midas International Asset Management, which overseas $10 billion in assets.

Korea’s biggest shipyards are struggling with fewer orders and growing debt, as low freight rates discourage ship owners from making agreements for new vessels. They’ve also been hit as their bet on deep-sea oil rigs beginning in 2010 has been undercut by the sharp fall in crude oil prices over the past year.

Analysts predict that third-quarter prospects for the three struggling ship producers will not be bright either.

The companies all have massive amounts of paper revenue, but they’ve yet to charge their customers. A certain degree of yet-to-be-claimed revenue is normal at shipbuilders or construction companies because large projects last for years and the revenue for each quarter is calculated according to the progress of the project. For instance, when a shipbuilder has obtained a 10 billion-won vessel and it has completed 10 percent at the point of filing, 1 billion won is counted as the revenue.

But when the company and customer have different views on that percentage, the gap is considered yet-to-be-claimed revenue and the large difference can place the shipbuilder in a dangerous position.