Kim Jong-un and Xi Jinping do some outreach

Kim Jong-un and Xi Jinping do some outreach 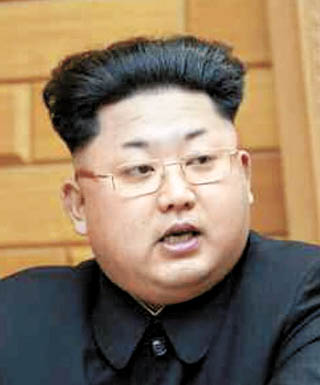 Leaders of North Korea and China are making attempts to mend frayed ties between the two countries.

North Korean leader Kim Jong-un sent a wreath on Monday to the cemetery of Chinese soldiers killed during the Korean War (1950-53) to mark the anniversary of the armistice, the North’s Korean Central News Agency reported Tuesday. Monday marked the 62nd anniversary of the cease-fire agreement.

The cemetery for Chinese soldiers in South Pyongan province is a symbol of the “blood” alliance between the North and China. Among those buried there is Mao Anying, the eldest son of Mao Zedong, who died in combat in North Korea. Kim visited the cemetery in July 2013 and personally laid flowers, but he skipped paying tribute last year, fueling speculation of worsening relations between Pyongyang and Beijing.

China is North Korea’s most important political and economic ally, but the relationship between the two communist regimes, once billed as close as “lips and teeth,” has deteriorated since Kim took power in 2011. After Pyongyang’s third nuclear test in 2013, Beijing became increasingly impatient with the young ruler. Bilateral ties worsened following Kim’s decision in December 2013 to execute his powerful uncle and advisor Jang Song-thaek, who had close ties with Beijing.

In July 2014, Chinese President Xi Jinping visited South Korea, making him the first Chinese leader to visit the South before going to the North.

In an apparent attempt to mend the rupture, Kim is increasingly making moves to engage China. Last week, he praised the Chinese Army for its role in the Korean War in a speech he gave at a national conference of war veterans.

During the event in Pyongyang on Saturday, Kim expressed his appreciation for China’s support for the North in the war. “I extend my respect to the comrades of the Chinese People’s Volunteers who sacrificed their lives to support our revolutionary war to bring our people freedom and independence and for the region’s peace,” Kim was quoted as saying by the North’s state media.

The last time Xi visited Shenyang was about two years ago, before Kim executed Jang, who had strong influence over China-North economic cooperation.

The trip came as a surprise because it took place only nine days after Xi visited Jilin province, also located on the border with the North, from July 16 to 18. The high-profile trip included a surprise visit to a village in the Yanbian Korean Autonomous Prefecture in the province.

The village, only 40 kilometers (25 miles) away from the North, was chosen as his first destination of the tour of the northeastern region, and he was received by residents wearing traditional Korean clothes.

It was reported that China has invited Kim to attend a commemoration event in Beijing to mark the 70th anniversary of the end of World War II in September.

A senior government official said Kim’s gestures appeared to be attempts to end North Korea’s isolation and dial down the international community’s pressure on Pyongyang to give up its nuclear arms program.

In a press conference on Tuesday, the North Korean ambassador to China said his country has no interest in an Iran-style nuclear disarmament because it is already a “nuclear weapons state.”

“We are not interested at all in dialogue to discuss the issue of freezing or dismantling our nukes unilaterally first,” Ji Jae-ryong said in a press conference in Beijing.