The start of the Yushin era brings pushback with it

The start of the Yushin era brings pushback with it 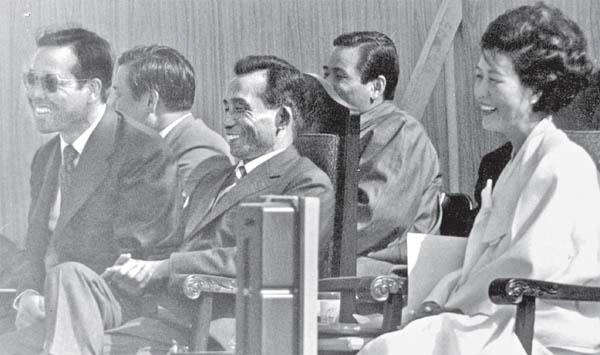 Kim Jong-pil, left, vice president of the Democratic Republican Party, laughs with President Park Chung Hee, center, as they listen to an endorsement speech at a presidential election campaign stop on April 15, 1971, in Chuncheon, Gangwon. President Park’s supporters voiced concern over the national security crisis due to factors inside and outside the country, while opposition candidate Kim Dae-jung pledged to abolish Homeland Reserve Forces. Provided by Kim Jong-pil

Talking about the Yushin Constitution makes me recall an anecdote from June 1987, when the country was embroiled in an anti-authoritarian democratization movement. I was holding a lecture at a church in Daejeon, when dozens of college students showed up and started to chant.

“Go away!” they shouted, “You remnants of the Yushin Constitution!”

“I’m not a remnant of Yushin,” I told them, “but the mainstream of it. You should refer to me that way.”

During the ’70s and ’80s, and even now, I’m the mainstream of the Yushin Constitution, which was in effect for more than seven years, from when President Park Chung Hee announced its adoption on Oct. 17, 1972, to when he passed away on Oct. 26, 1979. 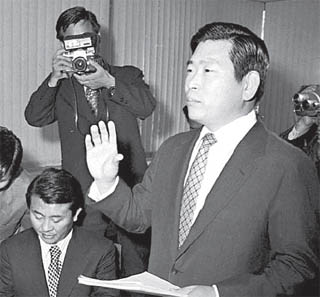 At the time of his declaration, I was already the prime minister and then spent three years under the Yushin Constitution until I stepped down Dec. 18, 1975. Not many stayed at the center of the Yushin era longer than me, so I think I’m responsible for both its merits and demerits.

A common misconception regarding the Yushin Constitution is that Korean Central Intelligence Agency (KCIA) Director Lee Hu-rak led its revision. But that’s not true.

President Park completely designed, led and, with his death, took responsibility for the Yushin Constitution. The idea first came after he won the presidential election in April 1971 against Kim Dae-jung by a mere 950,000 votes.

It’s true that Lee had known about it and suggested a strong system of rule, likely around the end of 1971. But he barely took part in its creation because he was so focused at the time on the inter-Korean relationship following a trip to North Korea in May 1972, to meet with North Korean leader Kim Il Sung.

Lee had a talent for coming up with and suggesting ideas that even his superiors couldn’t even imagine. The Yushin Constitution was one of them, and kidnapping Kim Dae-jung in Aug. 1973, was another - he was dismissed from his position for that incident.

President Park let me know of the new constitution on a Saturday, in May 1972. I got a phone call from the Blue House. Park asked me to play golf and talked about his plan in the car on the way to the New Korea Country Club in Goyang, Gyeonggi.

“I’m thinking of a national emergency control system,” he said. “I need a system for national mobilization because I assume the 1970s won’t be a smooth decade for Korea.

“We’ll face strong opposition, but later people will say we got through the decade well. It will be temporary until we get over this national emergency.”

Park didn’t specifically mention a constitutional revision, but that’s how I understood it. It seemed he had agonized a lot before telling me and was attempting to persuade me. I initially opposed his plan to revise the constitution in 1969, which allowed him to run for a third presidential term, arguing that it went against the principles of democracy.

This time, I supported his plan. Some have asked me how I could have agreed with the Yushin Constitution, which was even more against the principles of democracy, but we couldn’t avoid using emergency measures due to the difficulties inside and outside the country.

In March 1971, the United States withdrew one of its two military divisions, with some 20,000 troops. Its 2nd Infantry Division stepped back to the rear and the Korean military took over the entire 250 kilometers (155 miles) of the Military Demarcation Line.

U.S. President Richard Nixon was preparing another plan to withdraw all U.S. forces out of South Korea, and Kim Il Sung was claiming that he would have his 60th birthday celebration in Seoul. North Korean forces were drilling underground tunnels to send tens of thousands of light infantry troops across the border, and at the time, the North’s economy was stronger than ours.

Park was embarrassed and angry at the unilateral change in policies. He complained to the United States and asked his people to fight and build the country at the same time. Without U.S. forces, we would have to face Kim Il Sung alone.

We mobilized reservists and trained them, setting up a wall of anti-tank guns on the frontline. We placed anti-aircraft guns here and there, including on top of Mount Namsan, and threatened to fire them if North Korean military forces came down again.

But even in the face of these threats, Park and I had a clear vision: Having increased our productivity and boosted the agricultural sector in the 1960s, we now needed to focus on the defense industry and the heavy chemical industry. Only then, would we become an advanced nation with quality welfare. I couldn’t oppose Park’s plan.

The Yushin Constitution provoked a lot of criticism and resistance, especially because it was based on Park’s notion that the state had to press down on the public for South Korea’s survival. We now enjoy the freedoms that we do because of the hard work by those who lived through the Yushin era. I feel deeply sorry for them, but that’s how we were able to protect the country and prevent North Korea from encroaching.

Kim Il Sung was enraged by the declaration of the Yushin Constitution in Oct. 1972, especially because the two Koreas had just agreed upon the Joint Communique on July 4, 1972, that set out three main principles for reunification - independence, peaceful unification and national unity.

Kim must have felt betrayed, given that he had praised Lee as a hero following a series of secret meetings with him.

In the spring of 1973, Lee was resting at a hotel on a beach in Tongyeong, South Gyeongsang, when the North sent in armed men in a small submarine. Three of them tried to break into the hotel, but one was killed by a police guard, another was arrested after sustaining a gunshot wound and the other jumped back into the water.

When we interrogated the arrested spy, he said that he had come to kill Lee Hu-rak and that Kim Il Sung was furious about the Yushin announcement and had ordered the hit.

But Lee was not destined to die that day.

Park confronted them every time through the extra-constitutional emergency measures, which stipulated that the president could provisionally control the freedom and rights of the people. But he couldn’t stop the movements entirely.

I finally suggested a plebiscite, which he angrily rejected. But I asked him again several days later.

“I think we should do it. You can just ignore it if there aren’t enough votes for the constitution, and you can carry on if there are enough.”

He mulled it over.

“The plebiscite is not just a vote for the current Constitution but also a vote of confidence in me,” he said on Jan. 22, 1975, in his announcement. “If you want to abolish the Constitution, I will take it as a vote of no-confidence and step down.”

The vote was carried out on Feb. 12, with a 79.8 percent turnout, while 73.1 percent of the votes supported the Yushin Constitution.

We had turned a corner.

However, the results did little to assuage the controversy and Park had to implement emergency measures nine times until May 1975.

The ninth emergency measure stipulated that the press could not write anything negative about the Yushin Constitution and that the government could arrest violators without a warrant.

I resigned at the end of 1975. Then in 1979, KCIA Director Kim Jae-gyu put an end to the Yushin Constitution by assassinating Park Chung Hee.