Inflation seen edging up this half

Inflation seen edging up this half 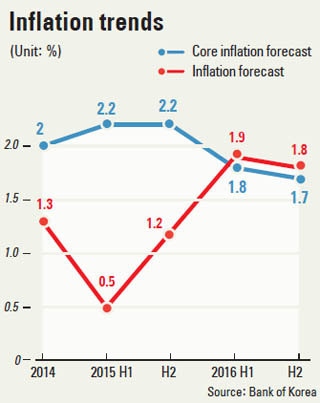 The central bank has issued a new, more optimistic outlook on the nation’s inflation, which has been below 1 percent for seven consecutive months through June. Somewhat oddly, therefore, predictions of higher inflation are good news here.

The report comes as the Korean economy skirts the edges of deflation. After showing signs of recovery, the outbreak of MERS earlier this year sent consumption plunging, eliminating any incentive for most producers to increase the prices of their goods or services.

The Bank of Korea on Thursday predicted that in the second half the inflation rate will rise to 1.2 percent compared to the same period last year. That would be more than double the rate of half a percent in the first half of this year. For the year as a whole, the bank said, inflation would still be a very modest 0.9 percent.

“Dubai crude dropped to below $40 per barrel in January after trading at $110 earlier,” said a BOK official. “In the second half, international crude prices will recover and by the fourth quarter inflation will likely rise above 1 percent.”

Because of the low crude prices in the first half, prices of petroleum products have nosedived by nearly 20 percent. That is an even sharper drop than the price decrease of 6.4 percent for those products in the second half of 2014. As a result, consumer prices of manufactured goods dropped 0.3 percent, a turnaround from the 0.8 percent increase in the second half of 2014.

Falling crude prices overwhelmed modest inflationary trends elsewhere in the economy, resulting in a half-percent inflation rate, down from the figure of 1.2 percent for last year’s second half.

Even if the central bank’s prediction of a 0.9-percent inflation rate is correct, the figure would still be less that the 1.3 percent rate last year. It would also make 2015 the first year in while annual inflation was less than 1 percent since the current method of calculating inflation was adopted in 1986.

At least until the 2015 numbers are in, the 2014 inflation rate is the lowest recorded since that time.

The low inflation has been accompanied by a sluggish economy; growth in the second quarter was sharply lower, at 0.3 percent, than the first quarter’s expansion of 0.8 percent.

Analysts have scrambled to lower their predictions for this year’s economic growth figure, even though they expect the economy to recover smartly in the second half of the year. Officially, the Bank of Korea’s outlook has been lowered to 2.8 percent; the consensus prediction is for growth of about 2.6 percent.

The anemic growth and lack of inflation so far this year means that there may still be no convincing reason not to worry about Japanese-style deflation in the Korean economy.

Even Finance Minister Choi Kyung-hwan, when asked at the Assembly earlier this month about that danger, said only the probability was low. “When you look at all consumer prices, inflation is low,” Choi said. “But when you look at core inflation, we are not near deflation.”

Core inflation excludes crude oil, agricultural produce and fisheries prices from the calculations because of their volatility. The core rate has not been lower than 2 percent. But even this argument has been questioned. A report by the Korea Institute of Finance released on Sunday noted that core inflation did include the huge increase in cigarette prices that was mandated by the government earlier this year. That one-shot price increase alone added more than half a percentage point to the core inflation rate. According to the institute, that makes core inflation look half a percent higher than it actually is.

The central bank sees stronger growth and higher inflation in the second half because it expects a substantial rise in crude prices. It said even if OPEC does not cut production to force prices up, political uncertainties in the Middle East could spook oil consumers and result in higher prices. Closer to home, Korea’s abnormally dry weather may boost prices of food while climate change fears will mean increases in grain prices globally.

But there are risks of even lower inflation. Crude prices could drop even further with Iran’s return to world markets, for example, or Korean consumers could refuse to cooperate by keeping their spending low in an attempt to deal with high household debt levels.