An actor tries to spread his wings

An actor tries to spread his wings 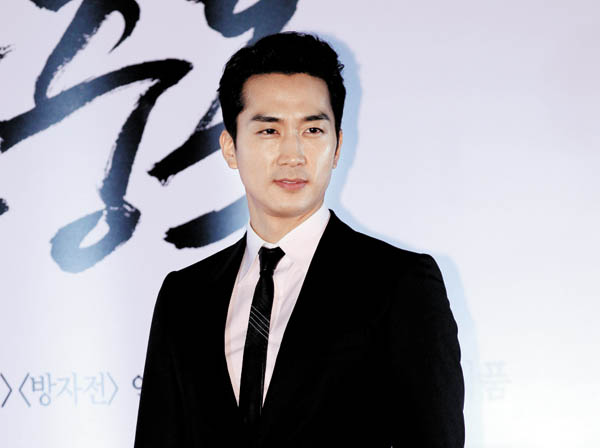 Actor Song Seung-heon, who is known for taking on roles with a masculine edge, has been broadening his range recently.

Not only has he played a domestic character - a caring husband and father - in the new movie “Wonderful Nightmare,” but he’s also expanded his filmography by acting in a Chinese movie with Hollywood stars, including Bruce Willis.

Song met with the media on Tuesday to promote “Wonderful Nightmare,” which opens on Aug. 13. The 39-year-old actor said that filming the family movie had made him want to have his own family and children.

Q. How did you like playing a father and husband?

A. Because I’m not married and have no kids, I really debated how to play a married husband and father. I tried to recall how I spent time with my nephews and nieces because actor Song Seung-heon seems very different from uncle Song. I also started to imagine what it would be like for me to have a child. At first, I felt awkward to be called dad, but as I filmed I got more comfortable. Then, I started thinking that [what I want is] to have a happy family like the one I have in the movie.

Do you think that your character is one that women in the audience would like?

That response is quite unexpected because I’m supposed to follow the emotional trials of the character played by actress Uhm Jeong-hwa in the movie. In fact, I have done many masculine characters who are shooting guns or fighting one another. I thought those characters made me look more charming. So it was a surprise that many women are more excited about me playing a very mundane husband and civil servant at a local district office who strives to live well. I think how men think is really different from how women think. I guess that’s why I got many comments that I don’t know women when I was dating (laughs).

Did you lose weight?

I weigh about the same, but maybe I’ve lost some fat on my face as I’m getting older.

How was working with actress Uhm Jeong-hwa?

It was really good. She is known for her good character and really worked to make things comfortable for her acting partners. At first, many were stunned that we would be working together in a movie, but it felt nice that more people gave positive feedback on our chemistry.

Your new movie has to compete with many Hollywood and domestic blockbusters like “Mission Impossible ? Rogue Nation” and “Memories of the Sword.” Do you feel pressure?

Our movie is no blockbuster, but it has its own strengths. There will be heartwarming feelings left with you at the movie’s end.

Bae Yong-joon and Park Soo-jin got married on Monday. How did you feel?

I felt something different. Maybe it’s because I have known Bae since we were young. I did tell him I was envious of him. It was the first time for me to think that I want to get married at a friend’s wedding.

How’s filming in China going for the movie “The Bombing”?

Thankfully, I eat well, so it isn’t really hard for me to stay in China. [The script] before didn’t specifically explain the nationality of the character I’m playing, but now it is set as Korean. I speak lines in English with Bruce Willis, but in Chinese with other Chinese actors and actresses. I didn’t speak Korean at all in the movie.