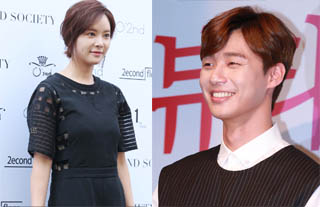 Actress Hwang Jung-eum, left, and actor Park Seo-joon have been confirmed to star as the lead characters in MBC’s new drama “She Was Pretty” (working title).

The upcoming romantic comedy, which will be the follow-up to “Scholar Who Walks the Night,” revolves around an unattractive female character who was once a highly admired girl from a rich family, and a man with model looks who used to be mocked for being overweight, played by Park.

In the upcoming project, Hwang will play Hye-jin, a beautiful and competent woman from a well-educated family.

“She Was Pretty” is highly anticipated by the fans of “Kill Me, Heal Me” (2015), in which Hwang and Park starred. Many fans are hoping the two celebrities will finally become a couple, after they didn’t link up during their previous drama.

The new show will also feature other A-list celebrities like Go Joon-hee and Choi Si-won.