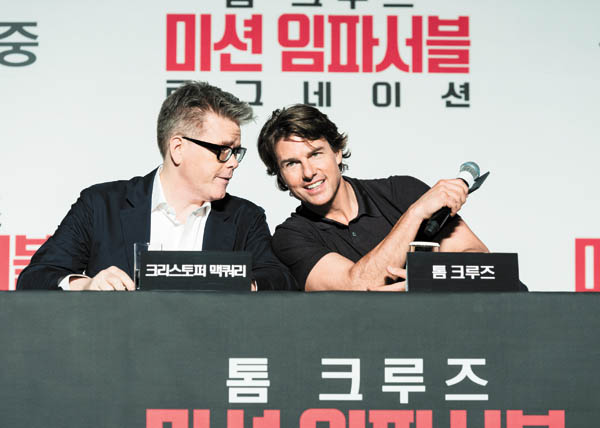 “It [the first “Mission: Impossible”] was the first film I ever produced in 1996 and 1995,” Cruise said during a press event at Grand InterContinental Seoul Parnas in southern Seoul.

“Growing up, ever since I was four years old, I wanted to make movies and travel around the world. For me, to be able to take a movie and travel in a different culture and with an international cast is a great privilege.

“It is character and story, but also the action and suspense. They are very challenging films as a producer to make. Creating stories and creating set pieces that serve these characters [are also hard]. So for me, I feel that it is amazing to present the fifth one,” the 53-year-old added. 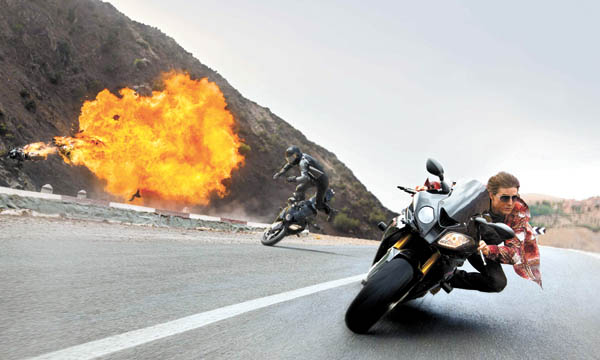 Cruise, visiting Korea for the seventh time, was accompanied by Academy-winning director Christopher McQuarrie who wrote and directed the latest series.

Although not credited, McQuarrie had worked on the previous installment “Ghost Protocol,” in structuring the scenes, according to Cruise.

Meanwhile, the fifth installment follows another impossible mission taken on by Ethan Hunt (Cruise) who is one day notified that his organization Impossible Mission Force (IMF) has been dissolved by the CIA.

The CIA claimed that the IMF’s target, a shadowy group called the Syndicate, doesn’t exist.

Nevertheless, Ethan goes on a mission of his own to take down the mysterious terror organization.

Along the way, he is joined by his old members including IT expert Benji, played by a hilarious Simon Pegg, and an enigmatic female agent named Ilsa, played by Rebecca Ferguson.

The film includes amazing stunts taking place on the ground, in the air and underwater.

Even the opening scene shows Cruise hanging onto the side of an airplane as it takes off.

The stunts were all undertaken by Cruise himself without using a double or CGI.

During the conference, Cruise revealed that he had to shoot the scene eight times because of the hot jet engine air and the eye-watering speed of the airplane.

Two filmmakers also added they had focused on keeping the plotline of “Rogue Nation” logical, which is rarely true of franchises that rely heavily on action sequences.

“There is a point where the story has a mind of its own,” Cruise said. “What we are really proud of together [with McQuarrie] is that everything wraps up within the story. The story starts one way and how it all comes together in the end [is amazing]. There are so many characters to juggle and McQuarrie did a wonderful job on it,” Cruise said.

When asked about the reason behind his frequent visits to Korea, Cruise simply said it was because “[Koreans] love movies” and he’d always received a “warm welcome” when he traveled through.

Cruise and McQuarrie were scheduled to hold a red carpet event on Thursday evening at Lotte World Mall in eastern Seoul.