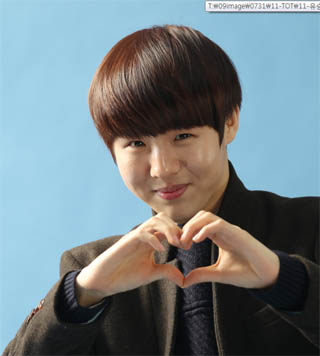 The 18-year-old singer You Seung-woo’s third single, “You’re Beautiful,” released on Wednesday, has taken the top spot on various major music charts, such as Naver Music, Genie and Monkey3, as of Thursday at 7 a.m.

You’s talent agency, Starship Entertainment, commented, “You’s first album released after joining our company has taken first place, and this is pretty amazing in that various popular musicians have also made their comebacks at the same time.

“We’re very thankful to the fans for helping You make such achievement, and we promise to provide the public with better music.”

The title track “You’re Beautiful” was made and written by hit songwriters Kim Do-hoon and Kim Yi-na, who provided the singer with music to perfectly match the young singer’s image.

Loui of the male rap duo Geeks features on the song, offering a sentimental verse.

You, who became a familiar presence on TV through the audition program “Superstar K 4” in 2012, has started actively performing based on his new music.