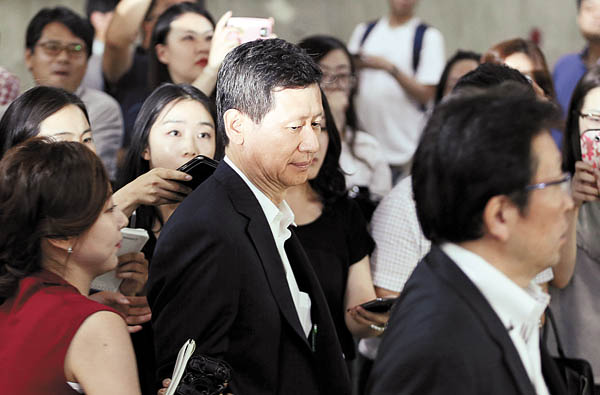 The feud among the scions of Lotte Group founder Shin Kyuk-ho heated up on Thursday, as the two battling brothers exchanged bitter accusations.

Shin Dong-joo, the vanquished eldest son of the Lotte founder, lashed back at his younger brother, Shin Dong-bin, after he seized control of both the Korean and Japanese operations of the retail and hotel group.

The family dispute developed this week into a public tug of war over management control of Lotte Holdings, the de facto holding company of Lotte’s Japan operations, involving the patriarch, the two sons and other relatives.

The older brother, who was relieved of his post as vice chairman of Lotte Holdings in January and later replaced by his younger brother, said Thursday that his trip to Japan last Monday was made upon the request of founder Shin Kyuk-ho, who intended to remove Shin Dong-bin as CEO of Lotte Holdings. 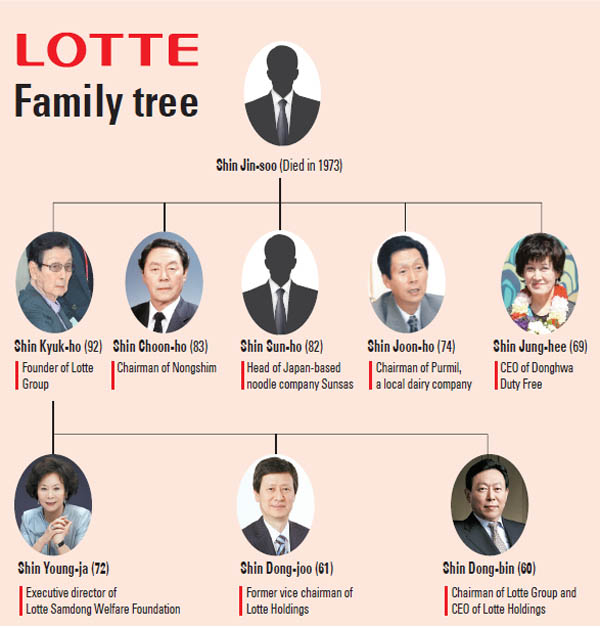 “He showed a strong and consistent willingness to remove Shin Dong-bin, but since he [Dong-bin] didn’t follow his direction, he decided to go to Japan,” Dong-joo said in an interview with Nikkei, Japan’s financial daily.

The comment appeared to counter media speculation that the older son masterminded the trip on Monday and persuaded his father to accompany him and fire six board members of the company, including the second son.

The board nullified the dismissals the following day saying it hadn’t voted for them and demoted the founder to honorary chairman.

The older brother told Nikkei that the decision to name Dong-bin head of Lotte Holdings was made without the consent of the father.

“He [the founder] was angered by reports that Dong-bin will run both the Korean and Japanese units.”

The eldest son took a swipe at Dong-bin, saying he didn’t report the progress of business in China or earnings from Korea’s operations.

Dong-joo also blamed his brother for his departure from Lotte Holdings, saying he shared the blame with Takayuki Tsukuda, a board director and CEO of Japan’s Lotte. The two, he said, manipulated information about an investment project led by Dong-joo to undermine him.

The younger son fought back with Lotte Group in Korea, issuing a statement denying the accusations.

The group refuted the claim that it was the father’s decision to fire the younger son.

“Shin Dong-joo and some relatives took the founder to Japan at their discretion and forced him to fire them [the directors], even though the frail founder could neither move freely nor make a rational decision due to his advanced age.”

Lotte said that the removal of Dong-joo from Lotte Holdings was because of the poor performance of Japan’s Lotte Group.

It also denied the accusation that Dong-bin failed to give reports about Lotte’s business in China.

“The Chinese operations began five to six years ago,” Lotte said. “From the beginning, the investment plans and business operations in China have been carried out in accordance with the words of the general chairman.”

Dong-joo returned to Korea Wednesday night while Dong-bin is scheduled to arrive at Gimpo Airport today. The father came back to Korea on Tuesday after his short visit to Japan with daughter Shin Young-ja.

The older brother played down an ownership stake held by the younger brother at Lotte Holdings, indicating that he might get an upper hand at an upcoming general shareholder meeting.

At the meeting, the older brother plans to change the existing board, according to the interview.

He said that he could receive support from two thirds of shareholders when combining the voting rights held by himself and Kojyunsya, a major shareholder of Lotte Holdings headed by the founder, along with employee stock ownership.

Lotte said the situation was the other way around.

“If [Shin Dong-bin] doesn’t control a dominant ownership of shares, it wouldn’t have been possible for him to nullify the [Monday] dismissals.”

The group also said the Lotte Holdings’ general shareholder meeting is designed to create a new position of honorary chairmanship. It declined to reveal when the meeting is scheduled for.

The battle of the brothers reverberated throughout the Shin family.

Shin Young-ja, a 73-year-old daughter, and cousin Shin Dong-in, 69, are on Dong-joo’s side. They accompanied him and his father to Japan on Monday.

A high-ranking source at Lotte Group told the JoonAng Ilbo, an affiliate of the Korea JoongAng Daily, that Shin Sun-ho, younger brother of Shin Kyuk-ho, oversaw the latest revolt against Shin Dong-bin. The 82 year-old is the head of Japanese noodle maker Sansasu Shoji.

“The attempt on July 27 to fire a group of board directors was led by Shin Sun-ho,” the source said.

“The uncle planned the trip to Japan and took Shin Young-ja, Shin Dong-in and other cousins,” the source continued, “After Dong-joo was removed from Lotte Holdings, the uncle directed an attempt to bring the eldest son back to management.”

Each member from the alleged alliance against the second son has something in common; they have all seen declining influence within the Lotte Group.

Shin Young-ja, the daughter, once served as president of Lotte Shopping, a flagship affiliate of Lotte Group in Korea.

But she was elbowed out and sent to Lotte’s foundation in 2009.

Shin Dong-in, the cousin, now has the title of owner of the Lotte Giants, a baseball team of Lotte.

But until the early 2000’s, he served as CEO of Lotte Confectionery, after a stint at Hotel Lotte.

The most dramatic case is Shin Dong-joo. The oldest son led the Japanese operation as vice chairman of Lotte Holdings until he was ousted in January.

He then lost his positions at three other affiliates of Lotte Group. He was previously the vice chairman and CEO of Lotte International, vice chairman of Lotte Co., a confectionery affiliate in Japan, and had an executive post at Lotte Ice Cream.