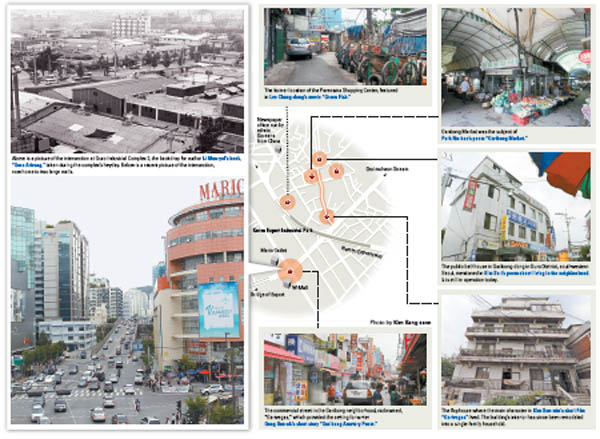 The bars on the main intersection in Guro District’s Garibong neighborhood open their doors for business at 3 p.m. every day.

It’s relatively early for happy hour, but just the right time for the blue-collar workers - mostly ethnic Koreans from China - who populate this area in southwestern Seoul.

“Most of the stores around here matched their opening hours to the work schedules of the workers, so we tend to open earlier than other places,” said Yu Seong-guk, who runs the Vegas Hof.

Last year the Seoul Metropolitan Government added the Guro Industrial Complex and its surrounding area onto its future heritage list, an effort by the office to preserve modern sites and structures for their value as part of the legacy of industrialization.

Garibong and Guro were filled with manufacturing factories during the 1960s and 1970s, following the establishment of the industrial complex in 1965, when wigs and electronic products produced there were in high demand in the United States and Japan. Products from the complex at the time accounted for 10 percent of all Korean exports.

“I came to Seoul with nothing and was able to send four of my younger siblings to college. It was a time when money flowed freely down the streets of the industrial complexes,” recalled Lee Chang-hyeong, who set up a ladies wear retail store in the area in 1976.

Yet the complex’s economic success and contribution to the rapid industrialization of Korean society came at the cost of the factory workers’ quality of life.

The trials and tribulations of those living and working in Garibong, mostly poor young women and ethnic Korean immigrants from China, have inspired many local artists, even now as the area continues to change.

“Guro Arirang” is one such work that touches on the complex’s legacy of industrialization.

The novel, written by Yi Mun-yol and published in 1987, is set against a backdrop of the Kuro strike in 1985, a joint effort by the female factory workers working for the companies in the industrial complex and university students dedicated to the labor movement.

The workers in the book rise up against 15-hour workdays, demanding that management treat them like human beings.

“Back then, [employees] had to work for 12 hours at a time on their feet. Legs would swell, and a lot of people became anemic and would faint,” author Gong Ji-young said in an interview last month. Gong’s debut novel was set in an electrical-parts manufacturer in the Guro Industrial Complex.

Some writers and poets have even gone undercover, working for companies and factories in the complex to experience the area’s labor conditions first hand.

Hwang Suk-young, for instance, wrote about the labor conditions at the Guro Industrial Complex in 1973 based on his experiences working for an electronics company there.

Afterward, most of the garment factories from that era were eventually replaced with shopping centers.

Daewoo Apparel, featured in Yi’s novel, has been replaced by Mario Outlet, and the Hyosung Corporation building that stood across from Daewoo switched out for a Hyundai H Mall.

The cramped dormitories, once filled with female factory workers, were in operation until as late as 2002, but have since been renovated and repurposed to make way for St. Francisco’s Welfare Center for the Disabled.

During the Asian financial crisis in the late ’90s, the garment factories accumulated debt and many left for China to save on labor costs.

Smoke no longer rose from factory smokestacks and real estate development started in earnest. Plans to modernize the complex were pushed forward, and Guro Industrial Complex was renamed as the G-Valley.

Yet some parts of Garibong remain the same.

The Guro Sewing Cooperation Cooperative building still stands in the corner between the new Mario Outlet and Hyundai H Mall, where it once stood between Daewoo Apparel and Hyosung Corporation in the 1980s. The bridge connecting the main buildings of Guro Industrial Complex 2 and 3 still exists, and though the Guro Labor Institute is now an office for the Korean Confederation of Trade Unions, the building is the same.

As the nation grew more affluent and poor working conditions in factories persisted, workers from outside Korea stepped in to fill the vacancies. Ethnic Koreans from China now make up the majority of the work force. Most of them are illegal immigrants and suffer many of the same hardships those in the 1970s and ’80s did.

But Garibong and its inhabitants continue to inspire artists.

“Garivegas” (2005), a short film by Kim Sun-min, centers on how Korean laborers were eventually replaced by immigrant workers, detailing both their joy and sorrows.

Additionally, Korean film director Im Heung-soon, who won the Silver Lion as a promising young artist in May at the Venice Biennale, grew up in the Guro Industrial Complex area. His documentary “Factory Complex,” which will tentatively be released next month, revolves around the struggles of female factory workers from Korea and other Asian countries working in the Guro Industrial Complex and other industrial areas.

Im’s film moves between the lives of the female factory workers at the Guro Industrial Complex 40 years ago and the female workers today.

He also produced the film as a resident artist at Seoul Art Space Geumcheon in Geumcheon District, western Seoul, which was once home to a cluster of industries like Guro District.

“While working at Seoul Art Space Geumcheon, I wondered where all the girls who worked at the factories [in the area] ended up, and those questions inspired this film,” Im said in a press conference after receiving the Silver Lion award.

Seoul Art Space Geumcheon is an arts studio located in a building that was once used by a telephone coil company in the 1970s and a printing company during the 1990s in the industrial Doksan neighborhood in Geumcheon District, where Guro Industrial Complex 3 was once located, and where many manufacturers are still based.