Without lifeguards, it’s less safe to go into water

Without lifeguards, it’s less safe to go into water 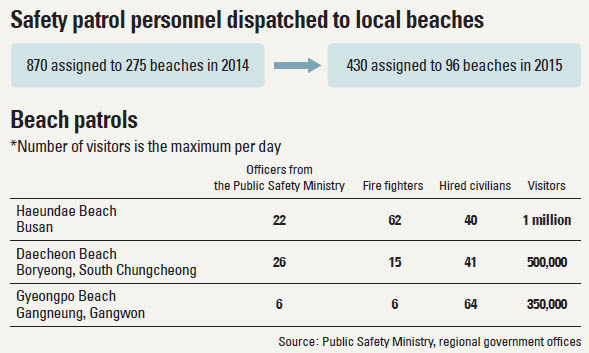 When a ferry carrying 476 people capsized off Korea’s southwestern coast on April 16, 2014, resulting in the country’s worst maritime disaster in history, the Korea Coast Guard was the first to be blamed for a death toll that reached 304.

More than six decades of work controlling the coasts of Korea and fending off illegal Chinese vessels was overshadowed by its lackadaisical rescue attempt on the day of the maritime calamity.

President Park Geun-hye’s response to the public outrage was blunt: she disbanded the Coast Guard.

“The Coast Guard’s rescue operation was botched,” she said in a national address on May 19. “They failed to improve maritime safety … they are lacking in life-saving discipline.”

A newly established Ministry of Public Safety and Security inherited the handling of sea disasters. The Coast Guard’s investigating powers were transferred to the police. Coastal patrols, including watching beaches and even lifeguarding, were given to regional authorities.

But regional governments with coasts say the decision is a disaster in the making.

Before the Coast Guard was abolished, 870 of its officers were assigned to maritime safety each day across 275 beaches nationwide. Today, there are 430 officers from the Public Safety Ministry on patrol at only 96 beaches.

With a small budget to hire manpower for the extra duties, many local governments along the seas are struggling to keep their beaches free from incident.

And with vacation season in full swing, tens of thousands of visitors are flooding to the beaches every weekend. Some local governments are hiring college students with absolutely no professional training as lifeguards.

The Busan Metropolitan City Government tried to fill the loophole with a drone, which was supposed to act as a safety patrol. It had its first test run on Wednesday, which didn’t go well. The drone crashed into the sea. The reason is not yet known.

Civil servants from regional governments, most without professional safeguarding experience, have also been mobilized to beaches and encouraged to postpone their summer vacations to the end of the year.

When JoongAng Ilbo reporters arrived at Daecheon Beach in Boryeong, South Chungcheong, on Thursday, 26 “safety agents” were on patrol, working in pairs. Nearly half had no certification of training. Many were adolescents with no experience in the safety field.

They mainly walked the beach and peered through binocular to detect any instances of accidents among swimmers to report to the police or the Public Safety Ministry.

“We haven’t had a single casualty yet this year, but I always feel so jittery,” said Kim Jong-hwan, who heads the safety department at the Boryeong City Government.