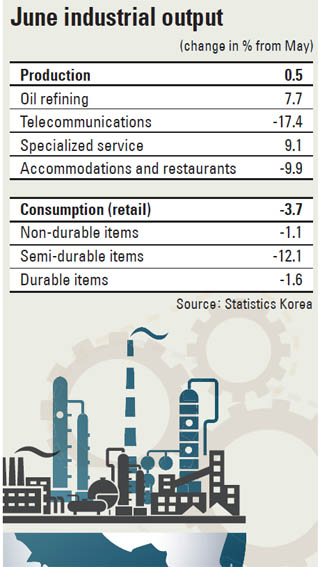 Korean industrial output rebounded in June from its fall a month earlier, but consumption shrank with the service industry heavily affected by the outbreak of the deadly Middle East Respiratory Syndrome (MERS).

Data released by Statistics Korea Friday showed that overall industrial production inched up 0.5 percent, pushed by a 7.7 percent growth in the oil refinery business and a 9.1 percent increase in some specialized service sectors, such as engineering skills, design and business consulting. Construction, a major industry for the Korean economy, also rose 3.9 percent.

The rebound in industrial output was good news, particularly because Asia’s fourth-largest economy had recorded a three-month string of production declines: by 0.5 percent in March and April and by 0.6 percent in May.

“The overall output of industries grew thanks to the mining, manufacturing and construction sectors,” Jeon Baek-geun, a Statistics Korea official, said by phone. “The big growth in oil refining was because operations at the oil refinery facilities of some companies were suspended in May for maintenance but resumed in June.”

Retail sales plunged 3.7 percent from a month earlier. The drop was far worse than that in April 2014, when the Sewol disaster hit the nation’s psyche and sales fell 0.8 percent.

In June, consumption of semi-durable items such as clothing plummeted 12.1 percent. Sales of durable goods such as home appliances dropped 1.6 percent, and those of non-durable items fell 1.1 percent.

With the sluggish consumption, output of service industries sank 1.7 percent and again, the slump was worse than that after the Sewol ferry went down. At that time, production in service industries was only down 0.6 percent. Leisure, sports and art sales were down 13.5 percent from a month earlier, and those of lodging and restaurants fell 9.9 percent.

Sales at department stores crashed, dropping 13.9 percent year-on-year. So-called hypermarkets, such as E-Mart or duty-free shops, sold 11.6 percent less than they did a year earlier.

Officials said the plunge in consumption in June was due to the spread of the MERS virus in the country, which kept Koreans away from public places.

Although the first case was found in May, the disease’s impact on the Korean economy was felt more in June when the first confirmed death started to scare the public.

With rising production but shrinking consumption, inventories in the manufacturing sector rose 3 percent from a month earlier and 5.8 percent year-on-year.

“The growth in industrial output in June was because of the plunge during the earlier two months,” Park Sang-hyun, an analyst at HI Investment and Securities, said by phone. “Also, if you look into the data closely, inventories are rising. Without an improvement in consumption or exports, industrial output could decline again as companies try to control inventory levels.”