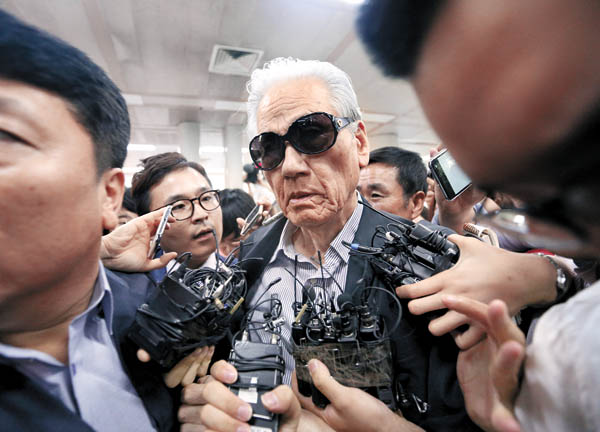 Amid a heightened family dispute over management control in Lotte Group, the conglomerate’s founding family members gathered in Korea on Friday to perform an ancestral rite for the late father of founder Shin Kyuk-ho.

All prominent relatives were present with the exception of Shin Dong-bin, who heads Lotte Group and the Japan-based Lotte Holdings, who extended his stay in Japan as he seeks to restore order in the de facto holding company.

Shin Sun-ho, the founder’s younger brother, arrived at Gimpo International Airport at 3 p.m. on Friday, where he said that the founder wanted the older son to run Lotte Holdings.

“What he wants is for Dong-joo, the former vice chairman, to run the business [Lotte Holdings],” he continued. “He thought that the company [Lotte Holdings] was taken away by the second son.”

A high-ranking source at the group had earlier pointed to him as the orchestrator of the revolt against Shin Dong-bin, who has long stood in the shadow of Shin Dong-joo, the family’s eldest son.

However, Shin Sun-ho, who serves as the head of the Japanese noodle maker Sansasu Shoji, denied speculations.

When asked to comment on Dong-joo, he simply answered, “No.”

The younger Shin is also believed to maintain an amicable relationship with the founder, though the patriarch engaged in squabbles with other siblings, including Choon-ho, the Nongshim chairman.

He nodded when asked if he was visiting Korea due to the scheduled ancestral event but has worked to distance himself from his family’s public feud.

When asked about the Lotte’s founder condition, he said the 92-year-old patriarch was in good shape to make rational decisions.

However, Dong-bin and Dong-joo have given conflicting assessments on the mental and physical state of their father.

The younger son said that the nonagenarian can neither move freely nor make rational decisions, indicating that the group’s top executive had been duped into firing six board directors at Lotte Holdings.

But Dong-joo insisted in an interview with Nikkei released on Thursday that his father had “a strong and constant determination to dismiss Dong-bin.”

While in Korea, Shin Dong-joo continued to launch a salvo against his brother, Chairman Shin Dong-bin. He appeared on a prime-time news program on KBS on Thursday to reiterate his claim that his father wanted to remove Dong-bin from Lotte Holdings.

He also brought documents he claimed were written by Shin Kyuk-ho that directed the younger brother’s dismissal.

As the family feud intensifies, observers have theorized that the conglomerate’s dispute over its succession was always destined due to the corporate structure of Lotte, which operates both in Korea and Japan.

Sales of the operations in Korea are far higher than those in Japan. In 2013, for example, Lotte Group affiliates reported combined revenues of 83 trillion won ($70 billion), making it the fifth-largest company in Korea. By contrast, Japan’s Lotte Group posted just 5.7 trillion won in sales the same year. But despite the discrepancy, Japan’s Lotte Holdings is at the top of Lotte’s complex cross shareholding structure.

“Many have warned that this type of business structure needs to be changed,” said a source with knowledge on the matter. “But Shin Kyuk-ho insisted on maintaining the structure.”

Tensions arose once Dong-joo started building up shares in key Lotte affiliates in Korea in 2013. In January, the older son was ousted as the vice chairman of Lotte Holdings.