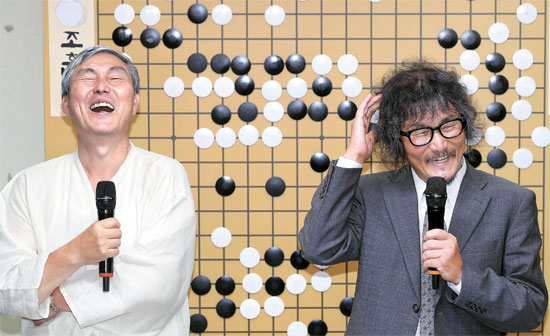 Two Korean-born baduk legends faced off for the first time in 12 years in a special match to mark the 70th anniversary of the modern variant of this strategic board game, also known as Go.

But the result was of little significance. Rather, the emphasis was on the return of two of the region’s best players, an exciting prospect for the game’s fans here.

The last time both Chos played against each other was in 2003, in the eighth round of the Samsung Fire & Marine Insurance World Baduk Open.

According to the KBA, modern baduk took hold in Korea around 1945, when international rules for the game were popularized. Since then, this Go variant has entered the mainstream, and both Chos have made huge contributions to its development, sweeping the game’s leagues in their countries of residence (The younger Cho has lived in Japan since he was six years old).

During the anniversary match, Cho Hoon-hyun acquired the white stones, while Cho Chi-hoon took the black.

The match ended with 154 takes, with an unexpected variable shutting down the game faster than anticipated.

Two hours in, at about 3:40 p.m., Cho Chi-hoon, who was supposed to read out the time, added up points in the last 40 seconds as the timekeeper called out “10!”

According to the rules, he was meant to do this after the timekeeper called “nine” and before 10, which meant the younger Cho lost. The moderator, Kim In, quickly entered the gaming arena to check for a possible misjudgment, but the result could not be overturned.

Cho Chi-hoon’s loss due to missed timing was unprecedented and took the game’s experts by surprise.

As the loser, Cho Chi-hoon did an assessment of each players’ moves, customary when a match is finished, in collaboration with Lee Sae-dol, another baduk player. He appeared crestfallen, but soon regained his composure.

“Cho Chi-hoon is indeed a maestro,” the elder Cho said, adding, he “had won the baduk game but lost the match,” an acknowledgment that his rival had only lost by a small margin.

He added that the time-keeping error would be the most memorable part of the game.

“I thought I had heard it being said aloud, but I didn’t think much of it, thinking it was a mistake,” he admitted.

Cho Chi-hoon and Cho Hoon-hyun left Korea to learn baduk from the masters in Japan in 1962 and 1963, respectively. Cho Hoon-hyun built upon his skills under the guidance of Segoe Kensaku, while Cho Chi-hoon studied under mentor Kitani Minoru, growing as a top-talent player.

Cho Hoon-hyun became a professional player at nine years old, returning to Korea in 1972 to complete his mandatory military service. He won all domestic baduk titles in 1980, 1982 and 1986, going on to win the first World Baduk Competition in 1989. His victory was a turning point for Go in Korea, and boosted the nation’s status as a major force in the game during the 1990s.

The two players are seen as perpetual rivals, but as time passed, the two have become light-minded regarding wins and losses.

“Looking at how he does his best in every game, I have a lot to learn from him, even if he is three years younger than me,” Cho Hoon-hyun commented on his baduk foe.

“I’ve always thought [Cho Hoon-hyun’s] baduk skills were 100 times better than mine,” he responded. “To reach above his level, I would have to put 100 times more effort into the game.”

Cho Chi-hoon also provoked laughter in the competition by drawing attention to his wild head of hair.

“My hair is like this because I pull on it while playing baduk,” he joked.