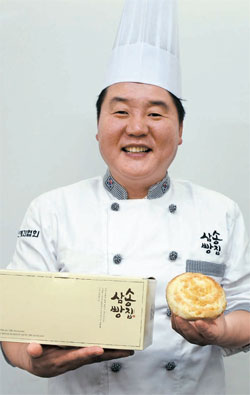 Park Seong-wook operates Samsong Bakery in Daegu, which will soon move into the capital area.Provided by Hyundai Department Store

For a slice of bread from Samsong Bakery in Daegu, customers have to wait in a long line, even in bad weather.

The most popular and requested product is undoubtedly the cornmeal bread, also known as “drug bread” due to its addictive taste.

Filled with cream and covered with cornmeal, the store sells about 5,000 per day on average.

And now, for the first time since opening its doors in 1957, the Daegu-based bakery is making inroads into Seoul and its surrounding areas.

Samsong is planning its grand opening for September at the Pangyo branch of the Hyundai Department Store in Gyeonggi. Then two others will move in to the department store’s Apgujeong and Trade Center branches in southern Seoul.

“I thought long and hard about whether I should open in Seoul,” said Park Seong-wook, 47, who owns the bakery, taking it over from his 72-year-old father, Park Han-dong. “I was worried I would lose money, but I decided to try my best to sell quality bread at affordable prices.”

The bakery is well received by the public, though it also had its share of ups and downs. Large franchises like Paris Baguette are always nearby, threatening to take his clientele base.

But Park said he simply decided to stick to the fundamental business principal of providing a great product at affordable prices.

“Small neighborhood bakeries are rising in popularity again,” he noted. “Customers are looking for cheaper yet delicious bread.

“In Seoul, there are so many bakeries that attach high price tags but just deliver a run-of-the-mill product.”

To stand out among bigger competitors, he also devised his own strategy: only offering a dozen items to streamline the business and focus on quality.

The shop also has strict guidelines on how the bread should be baked.

“We never burn it because that’s not good for one’s health,” he said. “We always bake them in the oven.”

He also pays attention to the ingredients, using organic products.

Park added that the freshness of the dough is also important.

“We make dough three times to make 6,000 pieces of bread,” he said. “We can’t make more even if we wanted to. We won’t let other companies do this job, because baking right away after making the paste is really important to make a more delicious pastry.”

But when asked to define Samsong’s bread in one word, Park was bashful.