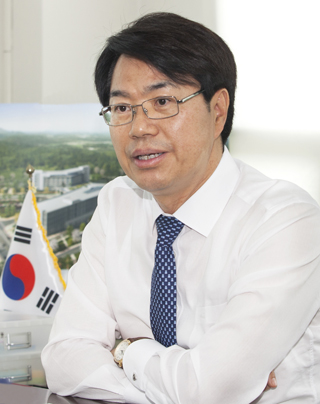 Oak Dong-suk, the new president of the Central Officials Training Institute (COTI), has come into his position at a critical time as the country moves toward strengthening its human resources development capabilities: The institute will move its headquarters to its new campus in Jincheon County, North Chungcheong, by next year.

As Oak, a lifelong educator, sat down for his first exclusive interview with the media since taking the helm of the organization in May, he quoted a German proverb - “Eile mit weile,” or “Make haste with leisure” - in stressing the importance of creating a training environment that molds domestic and foreign officials as the backbones of their respective governments, teaching them how to gain public trust regardless of the ruling administration.

COTI, which trains over 110,000 officials annually, was founded in 1949 as the National Officials Training Institute and moved to its current campus in Gwacheon, Gyeonggi, from Daejeon in Dec. 1981.

“Moving to Jincheon is a crisis and a challenge for COTI,” Oak, who previously served as the president of the Korea Institute of Public Finance, told the Korea JoongAng Daily on July 9, at the institute in Gwacheon.

“The challenges include the inconvenience of transportation, the greater difficulty in attracting competent lecturers, who are usually concentrated in the metropolitan area, and likewise, the current lack of infrastructure, since people are influenced by their environment and meeting others.”

But he added these issues will be resolved in the long run.

“After COTI came to Gwacheon, the facilities doubled, but our trainees increased sevenfold,” Oak said, “including those training in the institute’s cyberprograms.”

He said that in the past, those preparing to take the civil service exam stayed at the dormitories at Gwacheon, pointing out that “collective action builds camaraderie,” and noting that the new Jincheon campus will also enable similar hands-on dormitory-based basic training.

The Gwacheon campus, he added, will still be maintained as a “mecca to focus on the value of public service.”

The programs for foreign government officials will still mainly be administered in Gwacheon, Oak added, because the metropolitan experience and its resources are integral for those coming from abroad.

The institute offers numerous international programs for overseas government officials from countries including Uzbekistan, Vietnam and Japan to train at COTI and learn from Korea’s human resources development model, as well as experience.

“Training civil officials is very important, and our experiences are especially valuable for developing nations and countries with similar experiences,” Oak said. “I think that South Korea made a very remarkable decision when the government launched a market-economy system. At that time, there weren’t many nations that had gained independence in that period that did so, and likewise, there were nearly no countries that selected an open and free presidential election system.

“And though we did go through a period of authoritarian rule, we shifted over to a democratic system. Countries with shifting government systems, including Southeast Asian nations, can learn from the United States or Europe, but I think that they can learn something different in Korea that matches their situation, which is why I think they are coming here.”

“An example of this is our program with Malaysia,” he continued, “which has been operated for the past 31 years. The Malaysian government shoulders the cost of the program for its officials to come to Korea and has an organized alumni association for those officials.”

While the Korean government offers official development assistance projects that bring in public officials to train here, Oak said that COTI’s program with Malaysia can serve as an example of how such plans can transition in the future, particularly with the appeal of Korea’s education system, based on a unique development experience that goes unrivaled.

Oak comes from a civilian background and has been praised for his work as a longtime financial researcher, having spent nearly three decades as a professor at Incheon National University, also having served as the dean of its School of Northeast Studies.

“The COTI as an intermediary engine needs to select outstanding candidates and train them into officials who can lead state affairs,” he said. “That’s what we’ve done and need to continue to do.”

“This is a very important place, a place for the future of the country and a place to foster and train civil officials who the people can trust. And I have come at an important turning point for the institute.”