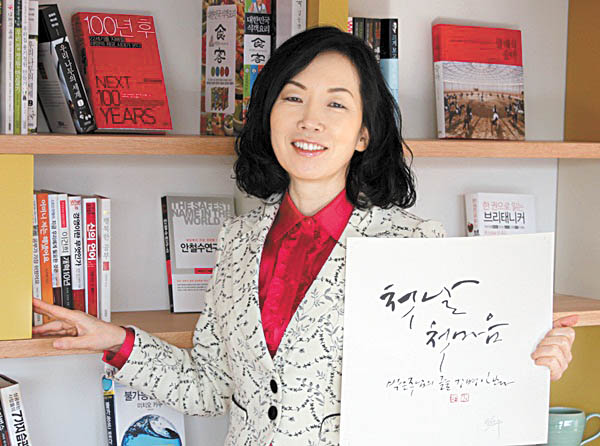 Park Eun-ju is the former CEO and president of Gimmyoung Publishers. [JoongAng Ilbo]

Barely a month after a plagiarism scandal involving star writer Shin Kyung-sook rocked Korea’s literary set, another ugly controversy has surfaced, this time regarding one of Korea’s top publishing houses.

Park Eun-ju, the former chief executive and president of Gimmyoung Publishers, filed a lawsuit on July 23 against the company’s founder and current Chairman Kim Gang-yoo on charges of malpractice, embezzlement and fraud, among a slew of other charges.

Park joined the organization in 1983 as editor-in-chief and became the president only six years later.

In her suit, she accuses Kim of lending out at least 3.5 billion won ($3 million) in company money that brought about tremendous losses; taking 3.6 billion won as his salary despite his failure to come into the office; and forcing her to give up personal assets worth 28.5 billion won, including company shares and severance pay.

In an exclusive interview with the Chosun Ilbo, Park went on to say that between 1984 and 2003, she ate and slept at a religious temple Kim co-directed in Yongin, Gyeonggi, during which she reportedly offered up her entire salary to the sect, at the same time receiving just a 200,000-won monthly stipend.

Park, who is often credited with making the publishing house what it is today, also accused the current chairman of engaging in a longtime affair with a married woman and placing members of his religious group in top posts at the company.

“There are many truths that aren’t being revealed [in regard to the lawsuit],” she admitted in an interview with MBN on July 28, without elaborating further.

Kim’s account, however, drastically differs from the allegations waged against him.

In a statement released through Gimmyoung Publishers on the same day Park filed her suit, the chairman claimed that Park was the one who, “through unjust methods, brought immeasurable losses to the company. ... She had been audited since March 2014 and suddenly resigned in May 2014.”

Kim continued that Park acknowledged her fault, pointing to a written agreement she submitted in September 2014 that included ways in which she would rectify her wrongdoings.

“She filed the lawsuit without living up to her promises in the agreement. It’s regrettable,” Kim said, adding that he has no plans to counter-sue.

Over the years, the influential publishing house has produced a number of best-sellers, including “Every Street is Paved with Gold,” an autobiography by the founder and chairman of Daewoo Group, Kim Woo-Choong; “Far Countries, Neighboring Countries,” by Rhie Won-bok; and “Justice: What’s the Right Thing to Do?” by Michael J. Sandel, among others.