Gift tax changes stir charges of welfare for the rich

Gift tax changes stir charges of welfare for the rich

While tax revisions for next year are still under discussion between the ruling and opposition parties, the biggest hot potato is the gift tax. The Ministry of Strategy and Finance is considering a grace period on the gift tax when a parent provides money to a child who is either trying to amass a jeonse, a lump-sum deposit for a minimum two-year lease, or trying to purchase a house.

The limit has not been determined yet, but a figure of roughly 100 million won ($85,600) has been mentioned.

The revision of the gift tax does not mean that children who receive funding from their parents for purchasing property would be completely exempt from paying a tax.

While they would not have to pay the tax immediately when purchasing a residential property, they would have to pay an inheritance tax that includes the earlier gift when the parent dies.

“It is still under discussion whether this plan will be included in the tax revision that is scheduled to be announced in August,” said an official at the finance ministry.

A cut in gift taxes is already used in several developed economies as a means of boosting the economy. One such country is Japan, where there are deep conflicts between the richer older generations and the poorer younger ones.

The Japanese government has already adopted a system that waives gift taxes on money given to offspring for purchasing housing or paying tuition.

It has also extended until 2019 a policy of exempting gifts of up to 10 million yen ($80,900) from taxes when grandparents give assets to grandchildren at marriage or for child care.

The idea of revising the gift tax came from the Korean Finance Ministry’s tax department when it looked into the Japanese changes. The tax department here saw the idea as one that would work in Korea to help revive the housing market and the overall economy.

The French government has a special exemption for inheritance taxes on gifts of up to 100,000 euros ($109,649) for purchasing real estate. The measure ends next year. 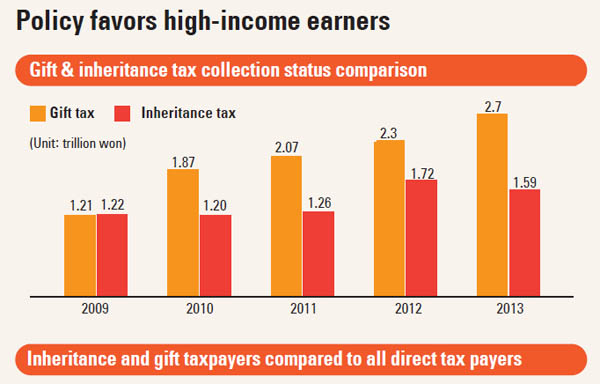 Considering the ceilings imposed abroad, the Ministry of Strategy and Finance estimates that the limit here would be about 100 million won. Elsewhere in the government, however, there is some hesitation about amending the tax code.

Financial authorities are weighing the pros and cons, such as whether the probable outcome would open the floodgates to father-to-son transfers that would disadvantage daughters, or whether the measure would overly benefit high income earners.

“We are reviewing gift and inheritance tax reforms, but we are also concerned about possible arguments that the tax cut will only benefit the rich,” an official at the ministry said.

The government’s annual gift tax revenue has been increasing: it was 1.2 trillion won in 2009 but rose to 2.7 trillion won in 2013. Tax officials say it should be politically possible to add tax deferrals because a tax bill will be payable eventually.

But in 2013, gift tax payers numbered only 109,644, less than 1 percent of the 14.22 million direct taxpayers. That may strike Koreans of modest financial means as a carrot for high earners.

That is a sensitive point because of the harsh backlash last year when Yoo Sung-kull, a Saenuri Party Assembly member, proposed a bill that would exempt transfers from grandparents to grandchildren from taxes if the gift were 100 million won or less and to be used for education.

The Ministry of Strategy and Finance may also propose removing the income ceiling for payments into an Individual Saving Account (ISA), a multipurpose tax-deferred account that allows savers to invest in many different types of assets. While the amount that could be invested annually in such accounts would be limited, there would be no income test for people opening the accounts. That runs afoul of the same sentiment that the system would favor the rich.

“It has not been long since the government faced fierce public criticism of its proposal such as the year-end tax adjustment, income tax rate changes and an increase in cigarette prices,” said Kang Byung-goo, an economics professor at Inha University. “It won’t be easy to persuade taxpayers, even though it is just delaying the tax, not an exemption.”