The government is under fire as criticism has risen about its long-term electricity supply plan for 2015-2029, which many environmental civic groups and the nation’s Ministry of Environment say is based on an overblown energy demand forecast.

They say the Ministry of Trade, Industry and Energy’s energy demand forecast is wildly high in comparison with the nation’s economic growth forecast, adding that the ministry failed to explain its methodology. They suspect the forecast is a bid to boost the nuclear power industry.

Despite the backlash, the Energy Ministry confirmed on July 22 its plan to build two additional nuclear reactors by 2029, either in Yeongdeok County, North Gyeongsang, or in Samcheok, Gangwon, which will help the government satisfy the maximum electricity demand of 11,930 megawatts predicted for 2029 while reducing the nation’s reliance on coal- and gas-fired power plants. The plan will raise nuclear power to 23.4 percent of the total supply and renewable power to 20.1 percent.

Environmentalist lawmaker Kim Je-nam of the Justice Party, who is also a member of the Assembly’s Trade, Industry and Energy Committee, released two documents sent from the Environment Ministry to the Energy Ministry in June. They cautioned that the energy demand estimate was too high taking into account the GDP growth rate estimates for the next 15 years and recent energy consumption trends. 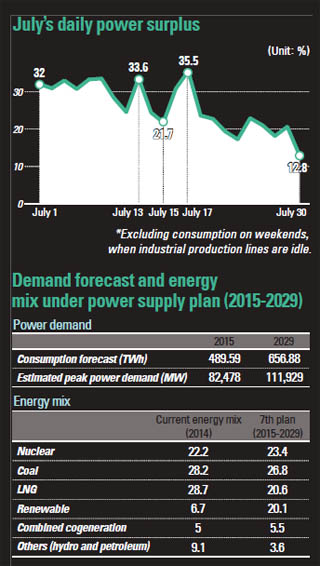 “The propriety of the two ministries’ differing energy demand forecasts has to be reviewed again, because the Energy Ministry’s 2029 forecast is dramatically higher than that from the Environment Ministry,” Kim said. “The difference [in forecasts] is equivalent to 10 nuclear reactors.”

The Energy Ministry is in charge of developing a long-term energy supply plan every two years and is the overseer of state-run power generators and distributors such as the Korea Electric Power Corp. and Korea Hydro & Nuclear Power (KHNP). With the authority to design those plans, the ministry is also legally obliged to confirm its energy plans after consultations and agreement from other ministries, including the Environment Ministry.

After adjustments that assumed the success of energy-saving plans, the Energy Ministry forecast that 656.88 terawatt hours would be consumed in 2029, the equivalent of four 1,000-megawatt reactors.

The two ministries reached those widely different conclusions even though they used the same GDP growth estimates prepared by the Korea Development Institute.

In one document, the Environment Ministry noted that Korea’s electricity consumption growth has slowed in this decade, referring to a report by the Korea Energy Economics Institute (KEEI).

It asserted that energy demand growth forecasts from 2016 to 2018 had been overestimated by more than 4 percent, questioning assumptions that energy demand would rise faster than the GDP in the future and that the GDP growth estimates for the next few years may also be too optimistic.

The Energy Ministry’s accuracy in calculating demand forecasts has been questioned often. Actual energy consumption for 2013 and 2014 were both about 4,000 megawatts lower than the ministry’s initial forecasts. The 4,000 megawatt difference is equivalent to the full operation of four nuclear reactors. 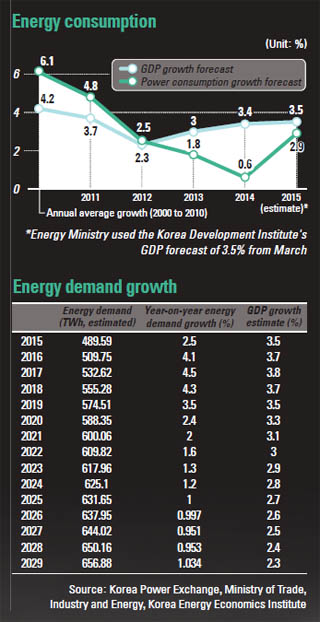 In Korea’s situation, an overestimate of economic growth would indeed lead almost inexorably to a decision that more power reactors are necessary, and that fuels suspicions about the reason its forecasts are higher than those of other agencies.

“The economic growth rate is the largest factor that determines national electricity demand,” said Kim, “so we are suspicious of the Energy Ministry’s forecast that says energy demand will rise at a faster pace than economic growth.”

According to the KEEI seasonal energy demand forecast report published in June, the nation’s energy demand steadily grew faster than the GDP growth rate until 2012 because heavy industries like steel were doing well and consuming vast quantities of electricity. But under pressure from competitors like China, that rapid industrial growth slowed dramatically beginning in 2013, the report said, automatically slowing growth in energy demand.

The KEEI report said a slowdown in the growth of exports of all kinds also was a factor. Its figures showed exports grew an average of 15 percent per year in the 2000s, but that growth has dropped since 2012 into the 2 percent range.

According to the KEEI and the energy industry, electricity used by industry accounts for more than half of the nation’s total demand. Another 33 percent goes to commercial buildings and stores and roughly 14 percent to households.

Another criticism of the power plan is that its goals for reserves has been set unnecessarily high, but the ministry alone is not responsible for setting those goals. The administration has pledged to build in a 22 percent reserve capacity by 2029 through building more nuclear and renewable power plants; critics say those reserves can safely be reduced to less than 18 percent.

Because there is nothing like an electrical blackout to trigger ire among Korea’s citizens, a fear of a political backlash may have also played a role in pushing up the estimates of future demand. In mid-Sept. 2011, sudden sweltering heat pushed demand above supply and left much of the nation without power one afternoon and early evening.

Because it was a weekday, offices closed, assembly lines stopped and computers stopped computing.

The Energy Ministry redesigned the energy supply plan hurriedly, opting to include new coal, LNG and nuclear plants in its plans. But the memory of the Fukushima disaster triggered the elimination of new nuclear plants from the mix after civic groups and the general public objected.

“Back then, the financial damage from blackouts was estimated to be greater than that of leaving power plants idle, which is why the government tried to build more plants even if they are not operated when power demand is low,” Roh Dong-seok, the head of the electricity policy research department at the KEEI, told the Korea JoongAng Daily. “Plus, the government’s goal of having a renewable energy supply of 20 percent of electricity in 2029 was too ambitious, which is another reason why stable energy sources that are cheap and generate a small carbon footprint, like nuclear, are needed.”

“It is true that the Energy Ministry’s plan may seem aimed at building more nuclear reactors at the end of the day, because not much of the public’s opinions has been reflected in the plan,” Roh continued. “But nuclear power is the most realistic choice considering the government’s two highest priorities in energy supply - stability in supply and economic feasibility.”

Roh also acknowledged that the seventh electricity supply plan has been issued without adjustments of energy demand forecasts and agreements with the Environment Ministry because the Energy Ministry rushed the plan.

The debates about the energy demand forecast’s accuracy is valid, Roh added, because the government was already a year behind schedule in releasing the supply plan, which made it difficult to scrap everything and start planning anew in response to the quickly sagging local economy.

“The seventh electricity supply plan was originally scheduled to be released last year,” said Roh. “The Energy Ministry must have already had most of the plan finished, especially when it came to the demand forecast, so it wasn’t able to take more time to fix the plan again. It is more accurate to say that the Energy Ministry was hurrying its schedule and so was unable to reflect the requests from the Environment Ministry, not that it simply declined to accept its request,” Roh added.

The Energy Ministry took an extra half-year to draw up its plan because it found it difficult to decide whether new nuclear plants were to be built and if so, how many. People were afraid after the Fukushima meltdown and after the scandal when KHNP was found to have used faulty parts when building reactors.

“The government usually tends to adjust the energy demand forecast in the next supply plan two years later if it sees signs of overestimation,” he said, adding that it is not just a Korean bureaucrat’s problem, but also one faced by international organizations like the International Energy Agency.

And politics is still a problem. Even with the new supply plan in place, the Energy Ministry is far behind schedule in planning and building the nuclear plants it wants; the lack of a consensus to build the plants is now coming home to roost.

A day after the ministry’s announcement, Yeongdeok County Chief Lee Hee-jin said that his government would halt all tasks related to new nuclear reactors because the central government did not keep a promise to Yeongdeok residents to take measures to ensure the new plants’ safety and to boost the local economy in other ways.

The Energy Ministry also limited the participation of Yeongdeok residents at a public hearing on the electricity supply plan just before it was issued.