With the prevalence of smartphones, vertical viewing is being positioned as the new trend in Korea. The tactic allows viewers to watch videos without having to rotate their mobile devices and has piqued the interest of many here over the past few months.

“Born Hater,” released by popular rap trio Epik High in October, was praised for having been filmed and unveiled in a vertical format, which allowed smartphone users to keep their devices upright while viewing.

“Tablo, [the rap group’s leader], came up with the idea, so we filmed the music video vertically to make it easier for smartphone users to see it more conveniently,” said YG Entertainment, who represents Epik High.

The movement can also be evidenced in other countries, including the United States. 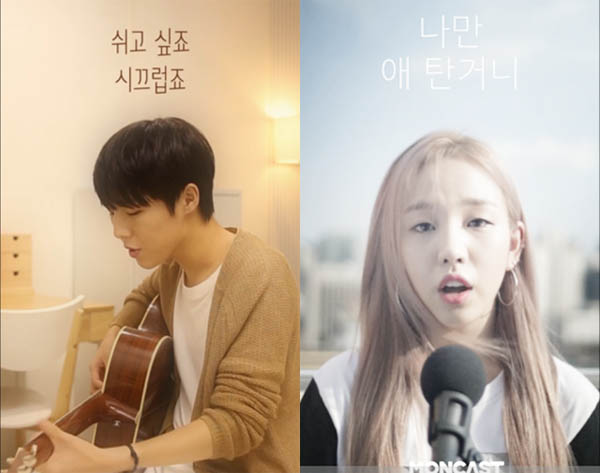 A vertical video of singer You Seung-woo, left, was unveiled on Moncast. Soloist Baek A-yeon also disclosed a video intended to be viewed vertically. [Screen capture]

Periscope, for example, Twitter’s mobile video app, and Snapchat, a messaging platform on which users can distribute pictures and videos, are a few of the front-runners leading the way in vertical viewing.

“Periscope is likely to create a new mobile world because it challenged this original horizontal-viewing culture,” Cho Young-sin, an expert in media policy, wrote in the bimonthly magazine Broadcasting Trend & Insight.

“Even though many videos had been filmed vertically over the last 10 years, they weren’t accepted in the market,” Cho said, implying that the collaboration between Twitter and Periscope had worked well enough to position it to head the shift toward content creation for vertical screens.

“Periscope could succeed because people these days shoot videos using their smartphones, distribute them through their personal devices and finally delete them using their phones,” the media expert added, in explaining Periscope’s timely use of innovation.

Snapchat creator Evan Spiegel also emphasized the importance of vertical-viewing, declaring that his motto is to “Think Vertically.”

The 25-year-old, whose application made him the world’s youngest billionaire, recently joined hands with the world’s biggest advertising company, WPP, and online media outlet The Daily Mail to create an agency for vertical mobile videos.

In response to Snapchat’s decision, U.S. venture capital firm KPCB wrote in its “2015 Internet Trends” that the effectiveness of the vertical video was immense.

The number of people watching an entire video [on their smartphones] is nine times greater when they view it on vertical screen instead of horizontal screen, the report noted. It further speculated that when the world fully arrives in the new mobile era, when people will dominantly use mobile phones to watch various content, it’s likely that they will rely more on vertical viewing instead of horizontal viewing.

Another example of the use of a vertical video is that portraying Baek A-yeon, singing along to her hit “Shouldn’t Have.” The video, which was posted on Moncast, recorded over 15,000 hits in less than two weeks, along with positive commentary on her singing ability.