Montblanc honors BIFF founder for his contributions to the arts

Montblanc honors BIFF founder for his contributions to the arts 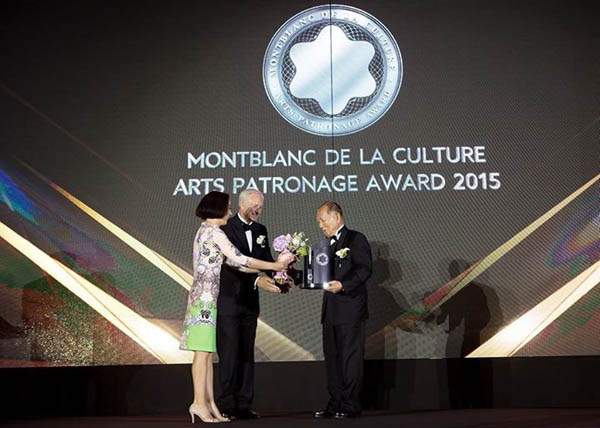 Each year, the company honors “true arts patrons” across 10 countries worldwide, selecting individuals or representatives from businesses that have devoted their time, money and heart to supporting domestic arts and culture.

“This is something that we can’t honor enough.”

Kim was recognized for a long list of contributions in helping develop the country’s film industry, which includes the establishment of the Graduate School of Cinematic Content at Dankook University in Seoul; the Korea Culture and Arts Committee; and the Culture and Arts Promotion Act.

But most of all, he is known as BIFF’s founder.

“I’m French, and as you know, cinema in France is very important,” said Sylvain Costof, the managing director of Montblanc Korea. “Personally, I was very lucky to attend the Cannes Film Festival six or seven times, and I have to say that each time I visit, the other festival everyone there is talking about is the BIFF.

“I think all members of the cinema community recognize Cannes as the most dominant film festival for Europe, and Busan for Asia.” 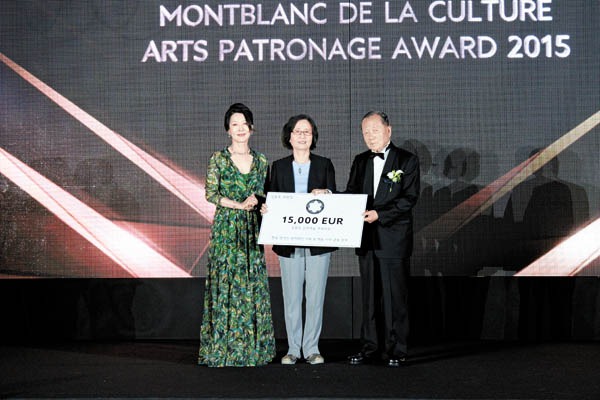 Kim donates 15,000 euros (16,600 dollar) in award money to the Players’ Welfare Foundation of Korea. Provided by the company

The recipient can choose the group or arts institution to which the award money will be donated.

Kim, who serves as BIFF’s honorary director as well as a special presidential adviser on cultural prosperity, decided to donate the money to the Players’ Welfare Foundation of Korea, a group under the Arts Council Korea that supports local theater performers.

“There are many genres in the arts, including film and music, but ... I personally believe the artists in the country’s theater industry lead tough lives,” he said.

Montblanc’s contributions to the arts stem from its brand and the emphasis placed on writing.

“When we started the award back in 1992, Montblanc already had a long history of supporting the arts and culture, especially since our brand is so much deeply rooted in the culture of writing,” said Bethge. “But in 1992, we thought we need to put more focus on our ambitions, our belief and our support of arts and culture.

“Many artists who we have supported told us that without true patrons, they would not have been able to become the high-level artists they are today. Because many times, artists don’t have the sufficient funds needed to truly concentrate on improving their talent.

“Patrons are indispensable for artists, and this is why we decided to establish the Montblanc de la Culture Arts Patronage Award.”

By doing so, Bethge said, Montblac is giving modern patrons a stage, “to tell the world why supporting arts and culture is so important to modern life.”

“We also wanted to ... inspire younger people, other people who listen to those famous patrons, like Chairman Kim [Dong-ho], and maybe get inspired to do something similar,” he said. “Maybe in 20 or 30 years, one of those people sitting at the award ceremony - maybe receiving the award - and he or she may say that it was Chairman Kim who inspired them to do something to support arts and culture.”

Bethge also emphasized the importance of the arts in the company’s branding, especially in its luxury brands.

It is the “source of inspiration and creativity, new ideas and new concepts,” he said.

“We live in a world, particularly in a business world, that is very focused on the next target, the next annual results, achieving sales. And often enough, we are sort of framed and blinded,” he said. “We are just looking in one direction while artists are just the opposite. They look left and right and try to create something new. This is why we need to support them. Because when we listen to artists, when we see their work, see their pictures, read their novels, we also get some inspiration. And ultimately, it makes a person or a company even more successful.” 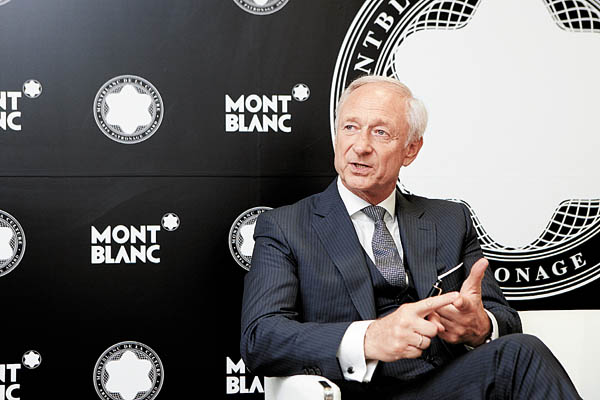 Lutz Bethge, the chairman of the Montblac Cultural Foundation, speaks about the company vision supporting arts and culture and the reasons behind the establishment of the Montblanc de la Culture Arts Patronage Award. Provided by the company

Kim, regarded as a semi-public official, is the first person outside the country’s corporate arena to receive the award.

“In the past, it was mostly the chairmen of large corporations who were supporting the arts, mostly by donating lots of money,” said Bethge. “Kim didn’t necessarily put in a lot of money, but he put his heart into it. He put five decades of intensive work into bringing Korean cinema to the forefront of Asia.”

Montblanc’s vision when it created the award, he added, was centered around people who have a passion for arts and culture and who believe that it’s important in today’s world.

“I think somebody like Kim is the best example of the type of person who puts all his heart, all his passion, into developing the arts and culture scene in his country,” Bethge said. “Even after he stopped working as BIFF’s president, he didn’t stop working. He is somebody who will support cinema until his last day, until his last minute.”