Lotte scions escalate their battle for control of group

Lotte scions escalate their battle for control of group 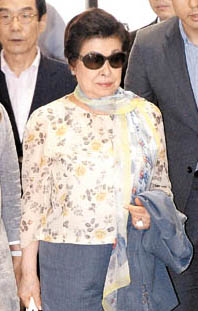 Hatsuko Shigemitsu, second wife of Lotte founder Shin Kyuk-ho and mother of Dong-joo and Dong-bin, prepares to depart for Japan at Gimpo International Airport on Saturday, two days after she entered Seoul. [NEWSIS]

The dramatic feud between two sons of Lotte founder Shin Kyuk-ho, 93, over control of the group is likely to enter a fresh phase this week as the younger son, Shin Dong-bin, is poised to break his near week-long silence and make a public apology today in Seoul for the tumultuous battle. He managed to oust his father as controlling chairman on July 28 and has been staying in Japan since.

On the other hand, Shin Dong-joo, 61, the founder’s eldest son and former vice chairman of Lotte Holdings, the group’s public corporation in Japan, told the Korean media Sunday he would depart for Tokyo today to drum up as much support as possible from shareholders in the conglomerate’s Japan operations. He wants to reclaim his previous position controlling the Japan operation and restore his father as chairman and CEO, he said.

Dong-joo has consistently claimed that he has been designated his father’s successor at Lotte. But he was fired from all his management positions with major Lotte affiliates at the beginning of this year for unknown reasons.

The outspoken first son of the founder also said in a Sunday interview with SBS, a broadcasting station, that should a shareholder meeting take place in Japan this week to vote on who should be chairman of the No. 1 retailer in Korea, he is already in a more advantageous position compared to his younger brother.

“Lotte Holdings’ top shareholder is Kojyunsya [widely known in Korea as Gwangyunsa] and the second are employees, and when those shares are combined they exceed more than half of total,” he said in the interview. “Should there be an agreement with employee shareholders, we could replace the previous board members [sacked by Shin Dong-bin on July 28] and a victory in the general meeting of shareholders will send my father back to his post.”

Kojyunsya is a packaging company in Japan with only three employees. It’s basically a shell company but it has a crucial role in Lotte’s overall corporate structure. It is the biggest shareholder of Lotte Holdings with a 27.65 percent stake and the de facto holding company of the entire Lotte group.

After coming to Korea from Japan on July 29, Dong-joo has been maximizing his media exposure in his battle for control over Lotte with the brother one year his junior.

Meanwhile, Dong-bin since July 29 has been meeting with a series of his business partners in Japan - ranging from Mizuho Bank to Nomura Securities and Mitsubishi - to reassure them of Lotte’s credibility and ask them to continue working with the Korean retail behemoth.

Dong-joo also confessed in the interview that his father reprimanded and struck Dong-bin in early July and that the son hadn’t visited the father since. The elder son also said he tried to discuss the management inheritance issue with his brother but was rejected.

Dong-joo, who graduated from Waseda University and is known to be more fluent in Japanese than Korean, apologized in awkward Korean for causing the stir and bowed at the end of the interview, probably mindful that the Korean public was not impressed with him speaking entirely in Japanese in an interview with the Japanese media earlier. The Lotte family has intimate relations with Japan, a side the Korean public is not fond of. Its founder is known as Takeo Shigemitsu in Japan and his second wife is Japanese, named Hatsuko Shigemitsu, which makes the two brothers currently in conflict Korean-Japanese.

The 88-year-old Shigemitsu, who came to Seoul last Thursday for a family ceremony and left for Tokyo Saturday, has given a crucial piece of advice to her husband over who should be his successor and how he should proceed from here, according to sources. Details are not known.

In addition to being Shin Kyuk-ho’s wife, she is a major shareholder of Lotte Group, as she owns a nearly 20 percent stake in Kojyunsya. Shin’s first wife is dead and he has a third wife, who gave birth to Shin Yoo-mi, 32, now an advisor to Lotte Hotel.