Eurasia Express winds up in Berlin

Eurasia Express winds up in Berlin 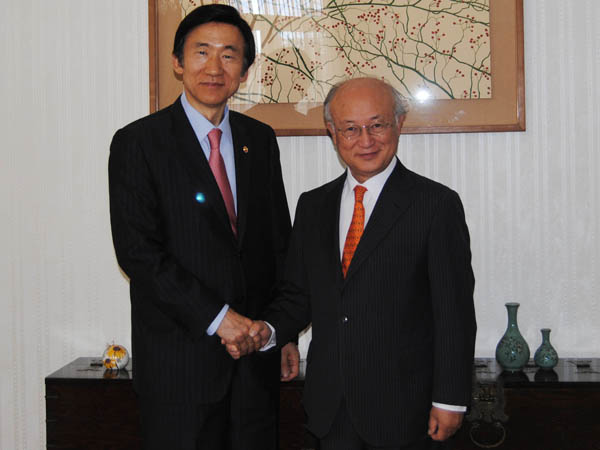 After concluding an extensive Eurasia railway trip to promote inter-Korean unification, Yun met with Amano in the 164-member IAEA headquarters in Vienna on Saturday, and agreed to bolster cooperation between Seoul and the international nuclear watchdog organization on the North Korea nuclear issue.

The Korean Foreign Ministry said in a statement Sunday that Yun “noted the very important role the IAEA had in the review” of the historic Iranian nuclear agreement reached on July 14 by Iran and six global powers led by the United States to curb the Middle Eastern country’s nuclear program in return for an easing of economic sanctions.

Amano explained to Yun the role of the IAEA in implementing the Iranian “Joint Comprehensive Plan of Action,” such as the verification process.

Yun said that the Korea, the world’s fifth-largest nuclear energy powerhouse, “will actively participate in the international community’s efforts to realize the deal,” adding that he hoped the Iran agreement will “contribute to a positive atmosphere for talks on the North Korea nuclear problem.”

On Thursday, over 200 participants in Korea’s Eurasia Friendship Express reached their final destination, Berlin, after a 14,400-kilometer (8,948-mile) journey across ten cities in five nations.

Minister Yun joined the railway project for its last leg in Poland on Tuesday.

In Warsaw, Yun held his first talks with Polish Foreign Minister Grzegorz Schetyna on Wednesday and highlighted that Northeast Asia can learn from Poland’s postwar reconciliation with Germany.

On July 14, a mix of public officials and people from the private sector including students and descendants of independence activists embarked on a 20-day journey on the Eurasia Express, a railway project that took the group through China, Mongolia, Russia, Poland and Germany.

The Eurasia Express, a joint project between the Ministry of Foreign Affairs and Korea Railroad Corporation (Korail), is symbolic of President Park Geun-hye’s Eurasia Initiative.

This year marks the 25th anniversary of German unification. It also marks the 70th anniversary of the end of World War II and Korea’s liberation from Japanese colonial rule (1910-45) and the division of the Korean Peninsula. On Friday, various cultural and academic events were held to commemorate these anniversaries.