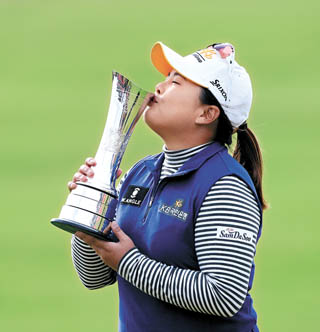 Park In-bee kisses the trophy after winning the Women’s British Open at the Turnberry golf course in Turnberry, Scotland, on Sunday. With the win, Park achieved the career Grand Slam. [AP/NEWSIS]

Now some people call her “Win-bee.”

At Turnberry Resort in Scotland, Park shot a 7-under 65 in the final round to finish the season’s fourth major tournament at 12-under 276. The British Open is sanctioned by both the LPGA and the Ladies European Tour. She edged her fellow Korean, Ko Jin-young, by three strokes.

“Greatest day of my life yet for sure,” Park told an LPGA publicist. “I obviously got a little bit lucky today. The golfing gods were on my side.”

She has now became the third youngest golfer, male or female, to win seven career major titles, after Tiger Woods and Mickey Wright.

There was a bit of confusion about whether Park’s victory could really be considered a Grand Slam; the Evian Championship in France was added as a fifth LPGA major in 2013, and although Park did win that tournament (in 2012, when it was the Evian Masters), it didn’t count as a major.

But on Sunday, the LPGA released a statement crowning Park as a Grand Slam winner because of her four major wins.

The statement said, “The LPGA did not add a fifth major championship to change history, alter discussions or make the accomplishment of a ‘Grand Slam’ more difficult. ... For players [active or retired] who have won four different majors available in their careers, the LPGA has and will continue to acknowledge them as having accomplished a career Grand Slam.”

Park, who turned 27 in mid-July, is the second-youngest golfer in the group; Webb was about six months younger when she won the 2001 McDonald’s LPGA Championship and completed her career Grand Slam.

Eager to keep interest alive, the LPGA has come up with a new crowning achievement, a “super career Grand Slam,” which requires a victory in all five of its major tournaments.

The Evian Championship will be held next month; Park has won six of the most recent 14 majors.

“There are many more tournaments, many more majors and many more things to do,” Park told the LPGA publicist. “So I’m sure I’ll find something to do.”

And there are indeed other tempting goals to shoot for. With seven majors, she is now tied for seventh on the career list with Juli Inkster and Karrie Webb. Ahead of her in that list are Patty Berg (15), Mickey Wright (13), Louise Suggs (11), Annika Sorenstam (10), Babe Zaharias (10) and Betsy Rawls (8).

Going into Sunday’s final round, Park was tied for fifth, three strokes behind the leaders Ko and Teresa Lu of Taiwan. Her play was uneven early; she had two birdies and two bogies on her scorecard after the fifth hole. But she then reeled off four straight birdies from the seventh through the 10th.

Ko, who has three wins on the Korean tour this season, kept her composure, at least for the moment. She had an eagle on the seventh and a birdie on the eighth, and then sank a 20-foot birdie on the 10th.

But the pressure of being chased by the world’s No. 1 probably took its toll soon thereafter; Ko, 20, was playing in her first major and her first tournament outside Asia.

Ko marked her first bogey of the day on the 13th and Park narrowed her lead to one shot after rolling in an eagle on the 14th. Park then birdied the 16th to take the lead for the first time in the tournament and never looked back.

Disaster struck Ko on the par-4 16th, where she put her second shot in a hazard and wound up with a double-bogey.

“I was over-thinking a little, and then I was a little bit nervous,’’ Ko commented to the LPGA about her approach shot on the 16th.

“I played great golf out there,” she said. “Even though I made a couple of early mistakes, I was able to hold on really well on the back nine.”

Park’s victory on Sunday also set a new high mark for Korea’s success on the LPGA. It was the 12th trophy for a Korean woman golfer this year, topping the mark of 11 set in 2006 and 2009.

Ryu So-yeon and the 18-year-old Korea-born New Zealander Lydia Ko tied for third at 8-under 280, so Koreans (and once-Koreans) were the top four in the standings.

Lydia Ko, who is ranked the world’s No. 2, could have been the youngest major championship winner had she won at Turnberry.

“They are machines,’’ Cristie Kerr, an American who tied for 13th, told the AP about South Korean golfers. “They practice 10 hours a day.’’

But the machinery wasn’t well-oiled for all of the Korean contingent. The 2015 U.S. Women’s Open champion, Chun In-gee, tied for 31st at 4-over 292, spoiling her bid to claim majors on four different tours in the same season.

Norway’s Suzann Pettersen finished fifth at 7-under, followed by third round co-leader Teresa Lu, who shot a 2-over 74 to finish the tournament at 6-under.

Another LPGA Tour rookie, Kim Sei-young, has two wins this season but failed to make the cut. Neither did defending champion Mo Martin and the veterans Laura Davies and Juli Inkster.