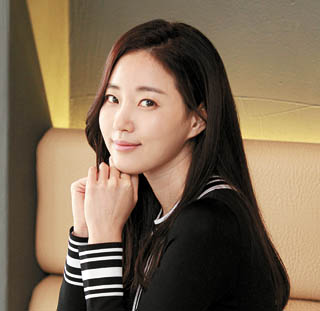 Four years ago, actress Kim Sa-rang disappeared from the public eye at the height of her career.

After rising to fame in the SBS drama “Secret Garden” in 2011 and subsequently starring in a number of major TV commercials, she stopped appearing in both dramas and films.

She had not suddenly decided to get married or become engulfed in some unsavory scandal, but in a recent interview with Ilgan Sports, an affiliate of the Korea JoongAng Daily, the 37-year-old revealed that she “even thought about quitting the entertainment scene for good.”

She said that she was “scared to pick her next work” and felt “skeptical about the whole industry.”

Despite her fears, she made a notable comeback through the JTBC drama “My Love Eun-dong,” which recently aired its last episode.

Her character on the show is a wife and mother with amnesia who experiences severe mood swings. Playing the woman’s chaotic emotional state as she gradually recovers her memories took its toll on Kim, who said she lost 3.5 kilograms (8 pounds) while shooting.

“I was always the healthy type, but my body began to hurt with her,” Kim said. “I was under so much stress trying to analyze [the character’s state of mind]. I am good at moving on to the next production, but it was different with this drama.”

Q. Why did you take such a long break from the industry?

A. I had received so much love from the “Secret Garden” series. I then started to feel skeptical about my next project. Even if there was a new story line, I always worried about whether it would do well, and I never encountered a character that could overcome my worries. So naturally, I had to get away from the entertainment scene for a long time.

Why did you feel skeptical?

I think acting is a very agonizing job. We have to be chosen by somebody, and then we have to endlessly long for other people’s love. I thought about whether I could be loved forever. But through “My Love Eun-dong,” I got to get rid of those worries a little bit.

Did you expect the series to become this popular?

Never. When I first received the script, I wanted to take it. I wanted to pour everything I had into playing Eun-dong. I guess my strong desire was felt by the audience.

How was it playing a mother with such a complex range of emotions?

Playing a mother character when I am not married was challenging. And to make matters worse, she had amnesia. Her memory didn’t come back all at once, but step by step. At first, I told the director that I couldn’t do it. I even got sick playing Eun-dong.

Do you have any plans to get married?

Now that I am way past the marriageable age, I think I get miserable when I see people who want to get married. But it doesn’t mean that I am opposed to getting married. I still want to go on dates. I think starring in this drama has helped me develop that desire a little more.

Do you have any regret now that you have finished the series?

Absolutely nothing. If I was asked to do it again, I think I wouldn’t be able to pull off the same emotional performance.

What is your next project?

I’m thinking I have to choose the next one as soon as possible to pay back the love I received from this drama. I don’t want to rest for too long. If there is a nice romance series coming my way, I would definitely snatch it. I want to work hard when I have the passion.