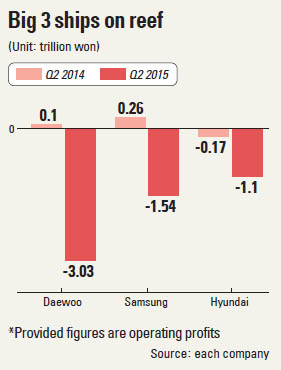 DSME reported a 3.0318 trillion won operating loss in the second quarter, while Samsung Heavy reported 1.5481 trillion won and Hyundai Heavy 171 billion won, mainly due to struggles in the offshore plant business and contracts they won at prices lower than their operating expenses.

The shipbuilders said over the weekend they will sack executives responsible for poor decisions that led to the losses, shut down unprofitable divisions, sell unnecessary assets and stop making new investments.

DSME shocked the country with its terrible results and said many of its executives are expected to be replaced after consultations with its major creditors, including the Korea Development Bank (KDB).

CEO Jung Sung-leep told the media recently, “I will try to strengthen the company’s discipline as soon as possible and the starting point is to shift employees to appropriate positions.”

DSME is also expected to sell assets. Industry insiders said affiliates including DSME Construction, catering service provider WELLLIV and the Future Leadership Center (FLC), which operates Sunning Point Country Club in Yongin, southern Gyeonggi, will likely be sold. The company is also considering canceling plans for a new headquarters and an R&D center in the Magok Industrial Complex in western Seoul, which were going to cost about 600 billion won.

Sources in financial institutions say the company needs to issue at least 1 trillion won in new stock. Executives of KDB recently told local media they are considering issuing new stock if necessary. “In addition to that, necessary processes, including a financial audit, might follow,” said an executive at a financial institution on the condition of anonymity. “Executives will be asked to take responsibility for losses and poor performance in many businesses.”

Samsung Heavy Industries is also having a headache after reporting about 1 trillion won in operating losses, which weren’t expected by many analysts or industry insiders. The company is considering reducing its number of executives and merging divisions running similar businesses. The company also decided to shut down a wind power generation business and decided to focus on technology development. The company will also consider selling an employee accommodation building on Geoje Island in South Gyeongsang.

After announcing its second-quarter results last week, Hyundai Heavy Industries replaced dozens of executives. Among the 37 newly appointed executives, 46 percent of them were in their 40s. Last November, the company cut 81 of its 262 executives and accepted voluntary resignations from 1,500 administrative workers at the managerial level or higher.

“Samsung and DSME might consider receiving voluntary resignations from employees soon,” said an executive in the industry on the condition of anonymity.