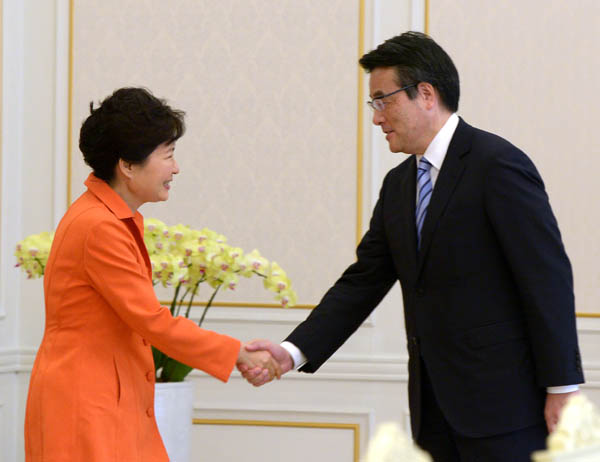 Katsuya Okada, the president of Japan’s opposition Democratic Party, conveyed during a meeting Monday with President Park Geun-hye, the need for a summit between the leaders of Korea and Japan and apologized for Tokyo’s record of wartime sexual slavery.

At a press conference held at the Westin Chosun Hotel in central Seoul, Okada expressed his embarrassment and apologies in regard to the Japanese military’s sexual enslavement of Korean women and girls during World War II and the agony they endured.

“As a Japanese politician, I am very apologetic and embarrassed,” he said.

With this year marking the 50th anniversary of the normalization of Korea-Japan relations, Park and Okada exchanged opinions on various methods for cooperation and exchange between both nations, the Blue House said.

“If the current pending issues causing problems are resolved one by one, at the next earliest time, holding a leaders’ summit will be desirable,” he said.

This marks Okada’s first visit to Korea since he was tapped to lead the Democratic Party in January and comes ahead of Prime Minister Shinzo Abe’s upcoming speech this month to mark the 70th anniversary of the end of World War II.

Okada added that Park had told him that if Abe’s 70th anniversary statement upholds the views of its previous administrations, including the 1995 Murayama Statement and 1993 Kono Statement, “it will be a considerable foundation for the future of the two countries.”

A Blue House official said that Park emphasized in the talks that reconciliation with history was the best way to move forward in bilateral relations and reiterated her hope that Japan’s move toward revising its security laws to enable its right to collective self-defense could still keep the spirit of Japan’s pacifist constitution.

“President Park said that this year should be one that can advance Korea-Japan relations further, which gave [me hope],” Okada said later in talks with Foreign Affairs Minister Yun Byung-se in regard to his conversation with the president earlier that day.

In response, Yun acknowledged that there was “a lot to do on the governmental level between Korea and Japan,” and that contributions from both political leaders was necessary.