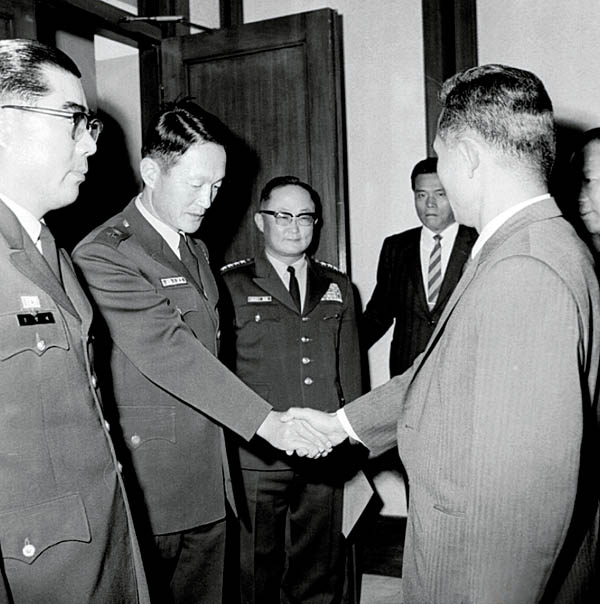 Yoon Pill-yong, a graduate of the Korea Military Academy (KMA), was the man for President Park Chung Hee.

Park first met Yoon in 1954, while he served as the commander of the 5th Division, and appointed Yoon as the assistant chief of staff for logistics, then bringing him in as he moved to the 7th Division and the Busan Logistics Headquarters Command.

He must have seen something special in him, because he even tapped Yoon to serve as the chief secretary for the chairman of the Supreme Council for National Reconstruction.

After the civil government came into force in 1962, Yoon returned to the military, where he headed the Counterintelligence Corps, the predecessor to the Defense Security Command (DSC). Then, in 1965, he was sent to Vietnam to head the Capital Mechanized Infantry Division during the war. 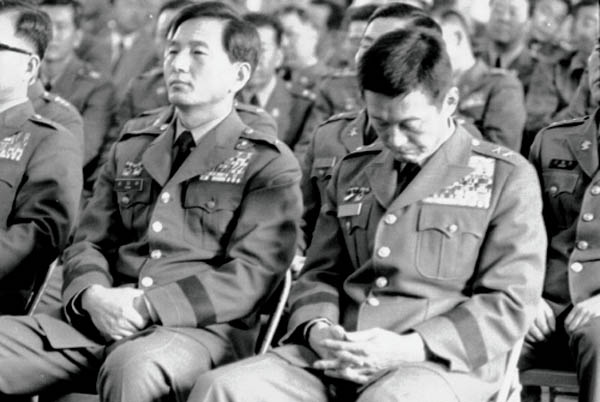 In 1970, he was named commander of the Capital Garrison Command (CGC), one of the most powerful institutions along with the Korean Central Intelligence Agency (KCIA), the Presidential Security Service and the DSC.

With his power and President Park’s support, Yoon wielded influence everywhere. He even got involved in personnel affairs in the military, which provoked criticism that he was acting as though he were deputy chief of staff.

As the commander of the CGC, he was a two-star major general, but even three- and four-star generals deferred to him.

I had never paid much attention to him. Yoon and I studied together at the KMA, but I didn’t try to talk to him or socialize. Even when he was appointed chief secretary for the supreme council, I talked directly with Park, not through Yoon.

It once occurred to me that he might lose his position, and not too long after, it happened.

In March 1973, he was dismissed from his position as CGC commander and arrested. On April 28, the military court sentenced him to 15 years in prison for embezzlement, taking bribes and ignoring military desertions among his men. Nine other officers were also sent to prison for terms ranging from two to 15 years.

His subsequent arrest was sparked from an initial conversation he had with KCIA Director Lee Hu-rak in Oct. 1972.

“The president is old enough,” Yoon apparently told him, “so you should advise him to step down before he gets any older and suggest a successor, which could be you.”

At the time, Lee’s popularity was immense due to his political efforts and participation in the establishment of the Yushin Constitution. He had also just returned from Pyongyang, where the two Koreas had agreed upon the July 4 South-North Joint Communique that set out the three main principles for reunification - independence, peaceful unification and national unity.

Seoul Shinmun President Shin Beom-sik, also a former Blue House spokesman, alerted the presidential office of the conversation, but because the revelation involved two people whom Park deeply trusted, he couldn’t go directly to the president.

Rather, he turned to Presidential Security Chief Park Jong-gyu and was later contacted by the president. After learning about the conversation, Park became enraged and ordered Commander Kang Chang-sung, one of Yoon’s main rivals who headed the Army Security Command, to open an investigation.

The move was part of the president’s divide-and-rule strategy, in which he pitted his subordinates against one another in order to maintain their loyalty.

For example, he would say to Lee, “Why is Kim Jong-pil telling everybody to kick you out when he is the one who brought you in?” despite the fact I had never talked about him.

Lee and I eventually became estranged, but that was how Park maintained the system.

Park was harsh on those who tried to challenge his power, so Yoon was eliminated.

Kang’s investigation subsequently moved onto the Hanahoi, a faction within the military comprised of KMA graduates that was led by Chun Doo Hwan.

Park never really monitored these cliques, probably because he assumed they weren’t harmful and that the men were his loyalists.

But the Hanahoi was growing to become an enormous organization that could potentially disturb our political order, and during the probe, Kang attempted to root it out.

Many of the officers in the Hanahoi came under Kang’s investigation, including Chun, a brigadier general. But Park Jong-gyu and Chun had become close while working together following the May 16 Revolution. The presidential security chief was ultimately the one who saved him, probably trying to widen his influence by giving out favors.

President Park eliminated Yoon but begrudgingly decided to keep Lee because he still needed him. Lee was second to none when it came to reading Park’s mind and providing solutions. But Park hadn’t forgiven him and still didn’t trust him.

Anxious about his position, Lee ended up abducting Kim Dae-jung, the president’s old rival in the previous election.

I was a neutral observer in the investigation on Yoon, and Park never discussed it with me, apparently because he couldn’t tell me that he wanted one of his men out. But the situation impacted me as well. The president didn’t like me to intervene in military affairs because he thought it could harm his power. He didn’t admit that openly, but I could feel it.

Until then, as the country’s prime minister and a reservist brigadier general, I had visited military bases from time to time to encourage our troops because I believed that the country couldn’t stand firmly without military forces. I was quite popular among the military circle and several key officials tried to get closer to me. After being appointed as prime minister, I visited Vietnam in Nov. 1971, to inspect the Korean military command there and took a New Year’s inspection tour both on the frontlines and at the rear.

But Park suddenly changed his attitude after Yoon was arrested in 1973. He appeared worried that I was meeting with military officials, suspecting a possible mutiny.

After that, I didn’t have any contact with the military at all. When I resigned in 1975, I completely severed my relationships, including with Chun’s “Shingunbu” (New Army Group), which [took power after President Park’s assassination and included core members of the Hanahoi faction].

While Park was in power, I had no contact with the military, the Blue House or the country’s judiciary. Park kept close to those who he had to do away with and was often critical of me. That was his weakness, and it was also the beginning of the end of his reign.