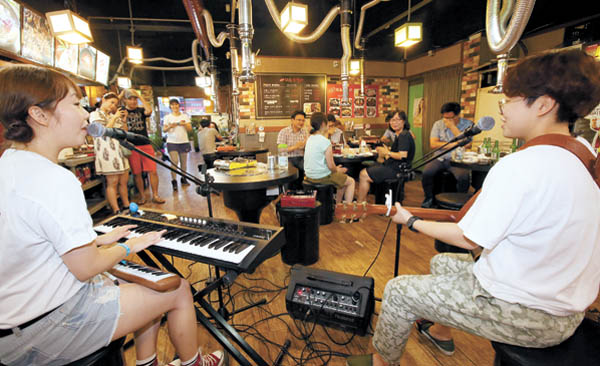 Doritori, an independent band that normally appears in the area around Hongik University in Seoul, on stage in the old downtown market in Seongnam, Gyeonggi. The show was part of planned cultural activities intended to revitalize businesses in the area. By Kim Kyung-bin

The municipal government of Seongnam, Gyeonggi, has scheduled a number of independent bands to perform in areas around Sinheung-dong, a neighborhood rarely frequented by visitors, in the hopes of attracting more people.

The musical acts will perform there each Friday until Oct. 2.

The move elevates indie bands as a key focal point in efforts to revitalize traditional market areas and downtown businesses, based on the concept that commerce can thrive in the presence of young consumers.

The bands and musical groups were invited by local merchants and civic groups in Incheon.

Nineteen independent bands are participating in the initiative, which was given a 60 million won ($51,519) budget provided by the Korean government and the Seongnam municipal government.

At 8 p.m. on July 24, two women took their places on a sidewalk in Sinheung-dong, where they set up an electronic keyboard and got out an acoustic guitar.

The duo, Doritori, usually perform in front of Hongik University in Seoul, an area where artists and musicians often put on public performances.

As Lee Moon-sae played their song “Morning Sale,” 20 or so young pedestrians gathered around the band, swaying to the rhythm of the music and recording the performances with their mobile phones.

“Seeing an indie band from around Hongik University on a downtown roadside like this was a surprise,” said Jang In-su, 22, who watched the performance with his girlfriend.

But not only do the bands play in open spaces, they also perform in or around downtown stores. Doritori’s performance at a grilled pork rib restaurant, just 40 minutes before their street performance, is just one example.

The women played two songs inside the restaurant at around 7:20 p.m., and during the show, each table was given a complimentary bottle of beer.

“The atmosphere of this town had really deteriorated because it’s so old and run-down, on top of the [Middle East respiratory syndrome] outbreak,” said 54-year-old restaurant owner Wu Yong-wuk, “but things are looking up thanks to the bands’ performances.”

One of the patrons, a 40-year-old businessman surnamed Kim, who was having dinner with his colleagues, added that he was considering returning.

“I’m thinking of coming here to spend time with my younger colleagues from time to time,” he said.

The musical acts also hold concerts around the neighborhood’s shopping arcades - in the Seongnam Central Underground Complex from 4 p.m. to 5 p.m. and at the Sinheung Underground Station from 6 p.m. to 9 p.m.

Inviting the groups was an intentional move to address the recent struggles of Yonghyeon Market in Nam District, Incheon. Two large shopping marts were built just a kilometer away from the market, part of a redevelopment project in the region that resulted in 3,000 families leaving the area.

The number of daily customers to the market used to reach up to 20,000, but now hardly 5,000 people visit each day.

To find a solution, a group of young merchants, all between 30 to 40 years old, got together and came up with the idea to host weekly performance.

They designated Tuesdays and Thursdays as regular performance days, and brought in even younger merchants between 20 and 30 years old.

Young friendly merchants, they reasoned, would attract a more youthful crowd and give people more incentive to visit the area.

But to make sure elderly patrons weren’t excluded, traditional Korean music performances and taekwondo and taekkyon demonstrations were added to the agenda.

“With more attention yo youth marketing, the number of customers has increased to about 10,000 per day,” said Jeong Tae-sik, 47, the vice president of the Yonghyeon Market Merchant Committee.

More events are planned for younger customers throughout August. A surprise event involving ghosts and goblins, as well as programs involving PR personnel dressed up as Korean geisha are currently being arranged.