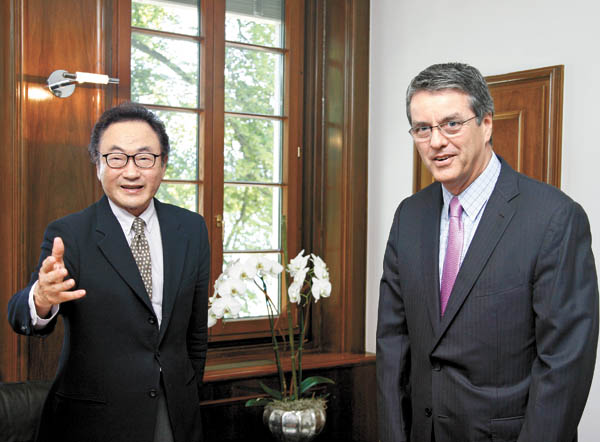 SaKong Il, Chairman of the Institute for Global Economics and adviser to the JoongAng Ilbo, left, and WTO Director-General Roberto Azevedo met at the WTO DG Office in Geneva, Switzerland, on July 20. They discussed a new trade order for the next generation. [JoongAng Ilbo]

For the World Trade Organization (WTO), keeping multilateralism alive with the WTO at the center is the biggest challenge in an era of proliferating Regional Trade Agreements (RTA).

SaKong Il, Chairman of the Institute for Global Economics and adviser to the JoongAng Ilbo, an affiliate of the Korea JoongAng Daily, sat down with WTO Director-General Roberto Azevedo to discuss the issue at the WTO DG Office in Geneva on July 20.


SaKong: I would like to begin by congratulating you for the successful near conclusion of the ITA (Information Technology Agreement) joined by 80 countries. Under your leadership, I am sure it will be concluded this Friday. I know Korea also played an important role in the process.

Azevedo: Thank you very much. Korea did play a very important role. ITA is a very big deal. We have been trying to get convergence since November when the U.S. and China finally came to some understanding. Since then, we have been trying to see whether we could get an agreement by everybody else. 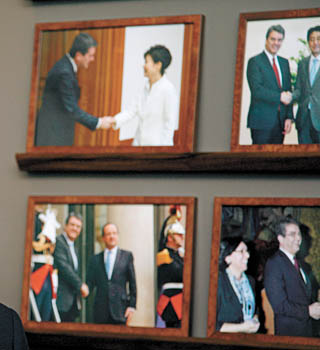 
SaKong: I personally think that it really is a historical event for the WTO because, first of all, it shows that the traditional rather rigid single undertaking of the WTO’s approach to the negotiations can be altered to adapt to the changed situation. Furthermore, it was done for IT, which is the most important industry today and will be more critical in the future.

Azevedo: It is the type of agreement that has more flexibility. It isn’t necessary for participating countries [to join all of the negotiation processes] if they are not ready to do so. Of course, the more countries join, the better it will be.

SaKong: Global trade today isn’t doing well enough. We all know that when the global economy did very well in the past, trade was the engine of growth and recovery. When the global economy was doing well, trade used to grow usually twice as high as the global GDP. But, unfortunately during the last couple of years, the trade growth rate was even lower than that of global GDP growth. According to the most recent IMF outlook, global growth was projected somewhere around 3.8 percent and trade will grow by 4.4 percent, which is a bit faster than global growth but still disappointing. From your perspective, how do you see the phenomenon? Is it mostly cyclical or are there serious structural problems involved?

Azevedo: That’s a good question but I don’t have the answer for that as of yet. We are now in the process of studying this issue very carefully. We can see some reasons for this deleveraging in many different aspects. First of all, Chinese and other emerging economies, which were very export-orientated, are changing their growth models. Also, the economies of commodity exporters such as Brazil are easily hit when commodity prices fall. The EU, which is responsible for one third of global trade, is decelerating. So it is a number of elements linked together. We should give a closer look to how these elements affect the relation between trade expansion and global economic growth.

SaKong: Some economists are saying that the WTO has been hijacked by major countries’ endeavor to have pluri-lateral arrangements, e.g. initiatives of the TTP (Trans Pacific Partnership) and TTIP (Transatlantic Trade and Investment Partnership). According to your recent speeches and remarks, you seem to welcome these initiatives, provided they inform the WTO and reveal the contents in a more transparent fashion and so forth. I would like to share your views in this regard.

Azevedo: I think that these regional and bilateral deals that we are seeing today, like I have always said, are a fact of the world. It is like me being against the rain. The rain is going to come and it’s part of the ecosystem. As nature is helped by rain, RTAs also help irrigate trade liberalization in different ways. Also, many of the things that we do multilaterally are originally inspired by things that are negotiated in bilateral agreements or regional agreements.

The problem is not that these agreements are out there. The problem is that we are not delivering here. That is the problem. But even then, we are begging to find ways of doing it. The ITA understanding is a good example. The Bali package is also important. These agreements recognized the fact that not everybody could be on the boat at the same time with the same speed and with the same kind of commitments. Multilateral agreements could be more flexible in different ways.

SaKong: Recently, you said that it will be quite difficult to have a very detailed and specific work program by the end of July regarding the DDA. So how high an expectation do you have on the upcoming Nairobi ministerial in December this year?

SaKong: I can see your point well. Perhaps, there are some countries that just don’t want an agreement, so they may just try to block to agree on the detailed work program. It leads me to another critically important issue of major member countries’ political commitment to reinvigorating the WTO and multilateral trading system. At the first G-20 summit in Washington in November 2008, G-20 leaders agreed to have standstill on protectionist measures. And then in London in April 2009, the leaders agreed on rollback. These helped to reduce the risk of the “beggar-thy-neighbor” type of protectionist policies to some extent. But today, according to the WTO investigations, although the number of protectionist measures by G-20 countries has been decelerating during last few months, the number of protectionist measures is still very large. So, I thought that the G-20 leaders, particularly at the coming November G-20 summit, should renew their commitments and again make some strong commitments. It is my view that it would be very useful if you could appeal to the G-20 leaders at the forthcoming G-20 summit since the global economy needs trade promotion as a critical stimulant.

SaKong: Definitely. Personally, I am quite disappointed by the recent G-20 summits. You know, the G-20 summit is not a one-time event, but it is a process. So until the next meeting the process has to be continued and previous commitments should be implemented. When I worked for the G-20, I always emphasized the importance of implementation, delivery, action programs and numbers, not just photo sessions and communiques, but follow ups with specific numbers. So once they commit themselves, they should ask their ministers to follow up and report to the next meeting.


An advocate of multilateralism

Roberto Azevedo, 57, was elected Director-General of the World Trade Organization on May 7, 2013 to become the first South American to assume the post. Right after being elected, he stressed that the Director-General should actively participate in trade negotiations.

A career diplomat who graduated with a degree in electrical engineering from the University of Brasilia, he was assigned to the Permanent Mission of Brazil in Geneva in 1997. He represented Brazil as chief trade negotiator for the Doha Round in 2006 and served as Brazil’s Ambassador in Geneva to the United Nations’ international organizations starting in 2008.

The Guardian has described Azevedo as “a gifted negotiator and an advocate of multilateralism.” Having successfully led expansion of the WTO’s Information Technology Agreement, he now faces the challenge of carrying on the decade-old Doha round of trade liberalization.

When Advisor SaKong Il presented the Director-General red ginseng as a gift, he said, “I need it!”

The WTO’s negotiations among 80 countries to eliminate tariffs on information technology (IT) products reached agreement on July 24.

The agreement will allow some 200 IT products, ranging from computers and memory chips to video game consoles and medical equipment, to be traded with no tariffs among 80 WTO member countries. The total trade in these IT products worldwide is about $1 trillion a year.

Regional Trade Agreements refer to multilateral trade pacts made among countries in a certain region or continent. The North American Free Trade Agreement and the U.S.-led Trans-Pacific Partnership, which is still under negotiation, are both types of RTAs. As the international trade negotiations led by the WTO have bogged down, RTAs are popular.