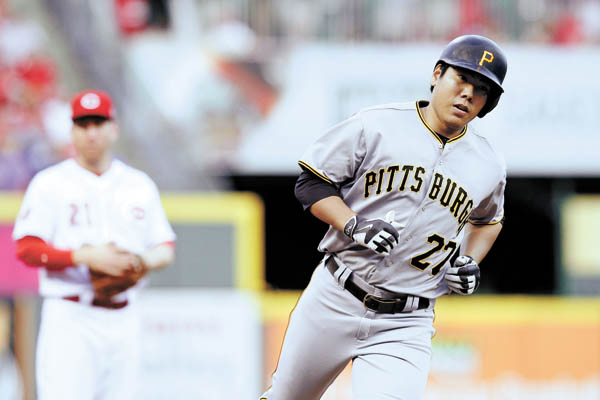 The Pittsburgh Pirates’ Kang Jung-ho circles the bases after hitting his 8th home run of the season against the Cincinnati Reds on Saturday in Cincinnati. Kang was named the National League’s Rookie of the Month for July. [AP/NEWSIS]

Pittsburgh Pirates infielder Kang Jung-ho was named the National League’s Rookie of the Month for July, the second Korean player to receive the award.

Major League Baseball announced Tuesday (Korean time) that Kang was named for the July honor after compiling a .379 batting average, .443 on-base percentage and .621 slugging percentage in 25 games, topping all rookies with at least 60 at-bats in those three categories. Kang, 28, also had nine RBIs and scored 18 runs.

He had 13 extra-base hits last month - eight doubles, two triples and three homers. According to the Pittsburgh Post-Gazette, Kang is the first Pirates rookie to assemble such numbers for the past nine decades, In September of his rookie year in 1926, eventual Hall of Famer Paul Waner went .381 with 14 extra-base hits.

In the American League, Los Angeles Angels left-handed pitcher Andrew Heaney was the top rookie for July after posting a 4-0 record with a 1.98 ERA. 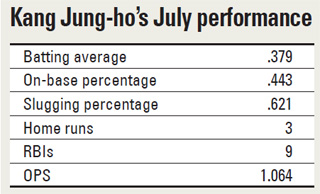 Kang is the first Korean hitter to jump directly from the Korea Baseball Organization (KBO) to the majors. With the Nexen Heroes last year, he delivered 40 home runs, a KBO single season record by a shortstop.

The other Korean athlete to receive MLB’s Rookie of the Month award was Choi Hee-seop, now with the Kia Tigers, who was named in April 2003 while playing for the Chicago Cubs.

Kang is the seventh Asian to win the award; the other five were all from Japan.

Ichiro Suzuki won the top monthly rookie honor four times in 2001 with the Seattle Mariners before claiming the AL MVP and Rookie of the Year awards the same season. He was followed by Kazuhisa Ishii (then with the L.A. Dodgers) in April 2002, Hideki Matsui (then a New York Yankee) in June 2003, Hideki Okajima (then with the Boston Red Sox) in April 2007. Texas Rangers right hander Yu Darvish is the most recent Asian winner, grabbing the award in April 2012.

Kang is the first Pirate to win the award since right-handed pitcher Gerrit Cole was named in September 2013. The last Pirates hitter to win was Pedro Alvarez in September 2010.

Kang was not a shoo-in for the honor, facing tough competition from some impressive numbers posted by rookie NL pitchers. Chris Heston of the San Francisco Giants went 3-0 with a 1.57 ERA last month, while Matt Wisler of the Atlanta Braves was 4-0 with a 3.30 ERA. Noah Syndergaard of the New York Mets was 2-1 with a 1.32 ERA.

Kang hit his stride in July as his team did the same. The Pirates had a league-best 17-9 record last month.

In particular, Kang’s OPS (on base plus slugging) was 1.064 in July, which was best among Pirates hitters and seventh overall in the MLB. This was nearly double his production in June, when he had a .596 OPS in 25 games. The Gwangju native was especially powered up in the last four games in July, going 8-for-15 with two home runs and three RBIs.

On defense, Kang showed why he was a four-time Golden Glove winner in the KBO. He played both third base and shortstop, filling in for injured teammates. When Josh Harrison hurt his hand in early July, Kang took over third-base duties, then moved to short when Jordy Mercer was sidelined with a knee injury.

At the Globe Life Park in Arlington, Texas, Choo went 1-for-3 with 2 RBIs to help the Rangers outslug the Astros 12-9. Choo hit a two-run shot in the first inning against Lance McCullers. He has a .239 batting average with 50 RBIs for the season.