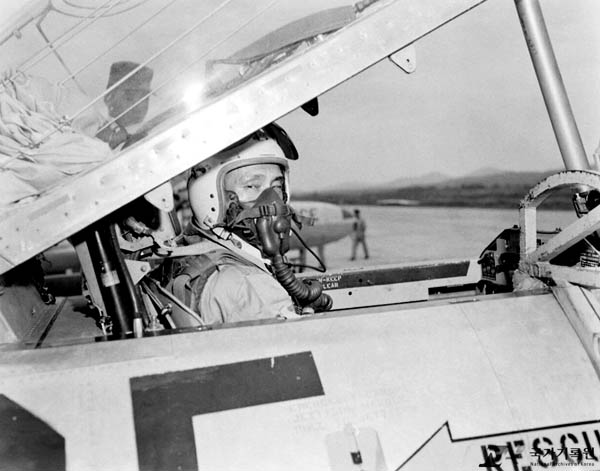 Chairman Park Chung Hee of the Supreme Council for National Reconstruction poses for a photo on an F-86 Sabre jet on a visit to Suwon Air Base on July 24, 1961. The jets were used by the U.S. Air Force during the 1950-53 Korean War and were introduced to Korea after the conflict. The United States was previously opposed to the Korean military adopting new jets, fearing that it might provoke the North. [National Archive of Korea]

The weak cannot defeat the strong, but can still take advantage of them. South Korea and South Vietnam both depended upon the United States to fight Communism.

Decades on, South Vietnam has faded into the mists of history, while South Korea has become a major player in the international community.

So what was the difference? South Vietnam lost its identity as the United States gave it a hand, but South Korea built itself up on its own strength. The United States withdrew its forces from weaker nations, but continued to help those who helped themselves. 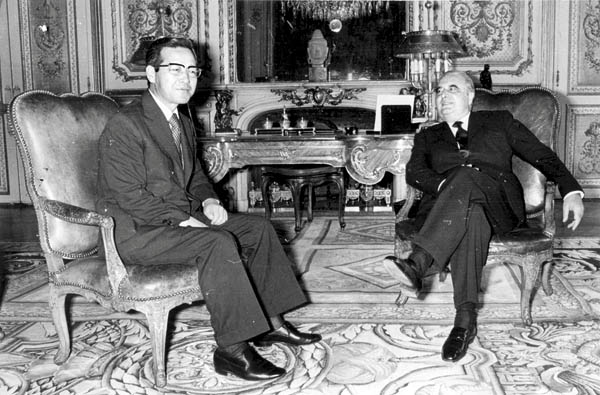 Prime Minister Kim Jong-pil, left, meets with French President Georges Pompidou on June 5, 1973, at the Elysee Palace, where he asked for France to support South Korea’s aims to change its diplomatic policies. At the time, the South did not oppose the idea of the two Koreas joining the United Nations together and sought to start diplomatic relations with Communist nations. Provided by Kim Jong-pil

On Jan. 8, 1973, U.S. National Security Adviser Henry Kissinger and North Vietnam’s Le Duc Tho met in Paris and resumed negotiations on a ceasefire agreement in the Paris Peace Accords. But while the pact seemed plausible, it was only the beginning of South Vietnam’s collapse.

For bringing stability to Indochina, Kissinger and Tho were awarded the Nobel Peace Prize in 1973. Tho turned it down, though Kissinger was naive enough to believe it marked the end of the war.

North Vietnam’s 140,000 troops began to attack South Vietnam without the aid of U.S. forces, and South Vietnamese President Nguyen Van Thieu found himself vulnerable without help from Washington, which distrusted its politics and unstable leadership.

The U.S. government also changed during this time with the 1972 presidential election, which saw anti-war demonstrations nationwide.

South Vietnam wasn’t the only place where the United States wanted to withdraw its forces. On March 27, 1971, one of two U.S. divisions left Korea, taking with them 22,000 troops.

In the fall of 1971, the United Nations General Assembly also excluded Taiwan, allowing in the People’s Republic of China.

Later, in Feb. 1972, Chinese leader Mao Zedong and U.S. President Richard Nixon met in Beijing, an event that was considered to be the end to the Cold War-era world order, or detente. But for South Korea, it only blurred the lines between friends and foes.

In Sept. 1972, Japan quickly established diplomatic relations with China, and South Korea had no choice but to revise its diplomatic principles in line with the Hallstein Doctrine, which stipulated that we not maintain relations with countries friendly to North Korea.

Going back to Jan. 1973 in South Korea, President Park Chung Hee was seeking a major change in national politics, national security, the economy and diplomatic relations. Park established the Yushin Constitution on Oct. 17, 1972, which restricted people’s freedoms and gave him power to fully mobilize the country.

At his New Year’s press conference on Jan. 12, 1973, he released a declaration to open a heavy chemical industry era, and then convened a meeting with me and the ministers of national security and the economy at the Blue House.

Oh’s idea that we will find a way when we face a difficult situation soon aroused sympathy from the participants.

“And now we are seeing demands for industrial machines and defense technologies,” he continued. “In this context, the unstable national defense situation is a golden opportunity to foster the heavy chemical industry.”

We specified the fields of industry as steel, synthetic chemistry, shipbuilding, electronics, machinery and nonferrous metal. Then the only problem was money. Park estimated that we needed about $10 billion over 10 years, but when he asked Finance Minister Nam Duck-woo about appropriate funds, Nam couldn’t provide a clear answer.

The president ordered him to come up with the money anyway.

And then Park called me and ordered me to organize a committee comprised of cabinet members to handle the development of the heavy chemical industry in South Korea and attract foreign investment.

This is how we opened up another phase of the country’s modernization, independence, national defense and its heavy chemical industry in 1970s, whereas before, in the ’60s, we’d dealt with poverty with light industry. Park’s plan had actually worked and we had finished it. Everybody worked hard and sacrificed, confident in knowing that we had overcome our financial difficulties.

At that time, President Park also secretly ordered some of his people to develop nuclear weaponry. It was Sept. 1969 that Park began to think about nuclear weapons, once the Nixon Doctrine was announced, which meant each of its allies was charged with its own security.

When Washington announced in 1970 that the United States was withdrawing all of its forces out of Korea within five years, Park said to me: “We need to conduct research on nuclear weapons - a weapon to protect us - since we never know when the U.S. will leave.”

I agreed, knowing that we couldn’t depend on the United States for our national defense forever. If we couldn’t have a nuclear weapon, we had to at least be able to develop one. So that was also one of the major purposes of the policies based on the defense industry and the heavy chemical industry in the 1970s.

From May 19 to June 16, 1973, I visited six countries in Europe and Japan in an effort to adapt to the post-Cold War world order because North Korea was making its way into international society. On May 17, Pyongyang joined the World Health Organization (WHO) with support from China and other emerging neutral countries.

In this rapidly changing world, we couldn’t just compete with North Korea. During my visit to Europe, I also secretly and unexpectedly went to West Germany and secured diplomatic cooperation from Chancellor Willy Brandt.

The most important country on my trip to Europe, however, was France. Former President Charles de Gaulle had a lot of guts to test atom bombs, and the French airliner Airbus had grown bigger than Boeing.

I met with President Georges Pompidou and explained our plan to change the diplomatic posture toward North Korea, asking him to appeal to the U.N.

Afterward, President Park made a special announcement on June 23 in which he stated that South Korea no longer opposed the two Koreas joining the U.N. together and that the South was free to establish diplomatic ties with communist countries.

I met with French Finance Minister Valery Giscard d’Estaing and discussed French investment in Korea, which naturally led to a conversation about South Korea having nuclear technology. But let’s talk about nuclear weapons and missiles next time.